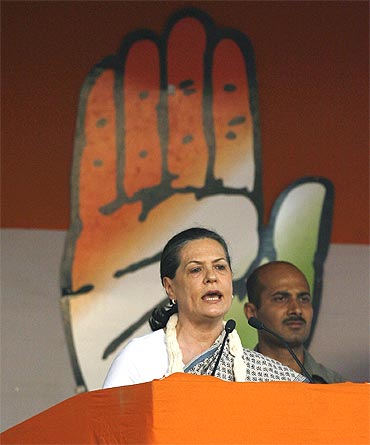 Riding high on the euphoria generated by recent visits of All India Congress Committee general Secretary Rahul Gandhi and a battery of its Union ministers, the Congress is going it all alone this assembly elections in Bihar, hoping for a better showing.

The Congress has decided to put up its candidates in all 243 assembly constituencies in Bihar. It has already released its first list of 84 candidates, ahead of its rivals -- the ruling National Democratic Alliance and the Rashtriya Janata Dal-Lok Janshakti Party combine. 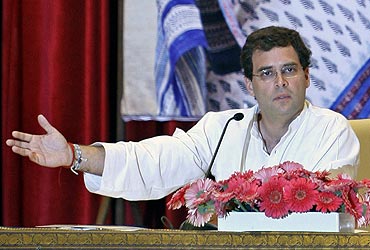 Buoyed with the success of the recent visits of Rahul Gandhi and others and a number of heavyweights from the RJD and the LJP joining the party, the grand old party expects a better showing during this election, state Congress spokesperson Prem Chandra Mishra said.

But as it appears now, the party could gain by getting votes of minorities and upper castes, especially Rajputs and Brahmins, a party insider feels. Congress' decimation as a viable political entity in Bihar has been complete in a flat 15 years, after it handed over the reins of the state to the then Janata Dal led by Lalu Prasad in Bihar.

The Congress, which had to be content with nine seats and six per cent vote share in the 2005 assembly polls, has been relegated to the fifth position in terms of the tally behind the Janata Dal - United, Bharatiya Janata Party, RJD and LJP.

It performed equally miserably in the assembly polls held in February 2005, winning 10 seats with five per cent vote share -- its lowest vote share-ever -- and stood fourth behind the JD-U, RJD and BJP. 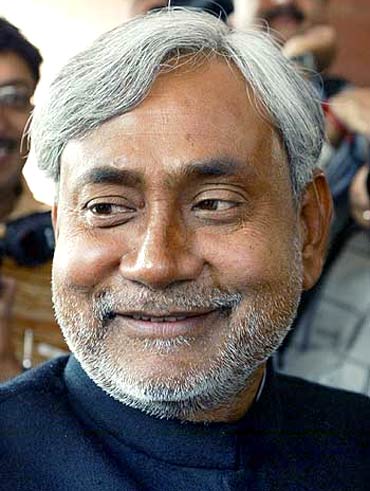 The twin assembly polls in 2005 and its outcome was significant in another context as the Congress contested only 84 and 51 seats respectively out of 243 constituencies, under the seat sharing arrangement with its then ally, Lalu Prasad's Rashtriya Janata Dal.

The Congress had also held the fourth position behind the RJD, BJP and Samata Party in the assembly polls held in 2000, with 23 seats and polled 11 per cent votes. Significantly, its 231 candidates out of 324 forfeited their security deposits. In the assembly polls held five years earlier in 1995, it surrendered, for the first time, its status as the main opposition party in Bihar to its arch rival BJP.

The Congress won only 29 seats with a vote share of over 16 per cent as against the saffron party's tally of 41 seats. However, the Congress's downhill journey in Bihar politics began decisively after it lost to the then prime minister VP Singh-led Janata Dal in the 1990 assembly polls, bagging 71 seats as against the latter's 122.

It was only the second decisive electoral defeat that the Congress had tasted in the Bihar assembly polls after its rout at the hands of the Janata Party in 1977. 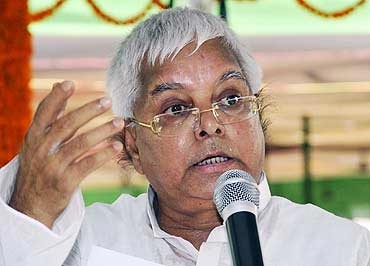 The Congress bagged only 57 seats and polled 23.5 per cent votes as against the Janata Party's 214 seats and 42.6 per cent votes, but the former staged a strong comeback in the 1980 assembly polls, winning a thumping majority with 169 seats and returned to power with an improved tally of 196 seats in the 1985 polls held in the aftermath of the assassination of then prime minister Indira Gandhi.

The Congress was earlier piped to the post at government formation by the then United Democratic Front after the 1967 assembly polls in spite of the fact that it emerged as the single largest party, securing 128 seats with 33 per cent vote shares.

The United Front government disintegrated within six months and in the assembly polls held in 1969, the Congress bagged 118 seats and formed the government with support from other parties. Earlier, the Congress had won successive polls in 1952, 1957 and 1967 with thumping majority of 239, 210 and 185 seats to form government.