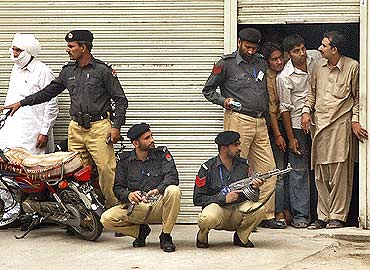 The terror siege on two mosques in Lahore came to an end on Friday evening, according to TV channels.

Earlier, heavily-armed Taliban terrorists wearing suicide vests stormed two mosques of the minority Ahmadi sect, packed with Friday worshippers, killing at least 80 people and injuring many more, in the first major attack in Pakistan's heartland of Punjab since March. Wielding automatic assault rifles and laced with grenades, the militants ran into the two mosques situated miles apart in coordinated attacks, seized hostages and set off running battles with the police.

"According to reports received from different hospitals, the death toll is more than 70," district administration chief Sajjad Bhutta told reporters.

The gunmen from Tehrik-e-Taliban Pakistan's Punjab wing struck the jam-packed mosques, where over 1,500 worshippers had gathered for Friday prayers, at 1.45 pm local time. They lobbed grenades and fired indiscriminately. The TTP's Punjab faction comprises radical elements of banned outfits like Lashkar-e-Jhangvi, known for its anti-Shia views.

While one of the mosques was located in the upscale Model Town, the other was in the heavily-congested area of Garhi Shahu. Citing police and rescue sources, Geo News channel reported that 70 people were killed in the attacks.

Scores of others were also injured. Lahore, the cultural hub of Pakistan, is home to over eight million people and has increasingly witnessed Taliban and Al Qaeda-linked attacks in a nationwide terror spree by the terrorists.

Gunfire and explosions were heard from the mosques of the Ahamadis -- who have been targeted by the radical Sunni groups in the past. The mosques were quickly cordoned off by security forces. The police killed one attacker and captured another two from Model Town, Inspector General (Punjab) Tariq Salim Dogar said. The attacker was wearing a suicide vest, which was defused.

Geo News channel said that seven terrorists had attacked the Model Town mosque. Sources said a retired lieutenant general of the Pakistan army and several policemen were among the dead.

Twenty eight of the injured victims were rushed to the Jinnah Hospital.  Three of them succumbed to their wounds soon after reaching the hospital. The Services Hospital received over 40 injured victims.

Officials said an injured attacker was operated upon at the Jinnah Hospital. Seven policemen, including Superintendent of Police Haider Ashraf, were injured in the exchange of fire with the terrorists. The police brought the situation at the Model Town mosque under control a little over an hour after the attack began. The operation to clear the mosque at Garhi Shahu, where several terrorists took up positions on a minaret and the rooftop, ended at nearly 4 pm local time.

Witnesses said several terrorists were wearing suicide vests. They said the attackers lobbed grenades and fired indiscriminately as they entered the mosques.

TV channels aired dramatic footage of policemen advancing towards the mosques and exchanging fire with the attackers. They also beamed footage of one terrorist firing at security forces from a minaret of the mosque in Garhi Shahu. Police and paramilitary forces surrounded the two mosques and took up positions on roads and rooftops around the mosques.

Both mosques are frequented by over 1,500 worshippers, including women, on Fridays. Hundreds of people were inside when the terrorists stormed the mosques. Some men and women barricaded themselves in rooms and prayer halls inside the mosques.

In a statement, Human Rights Commission of Pakistan chairperson Asma Jahangir said the body had warned the Punjab government about threats to the Ahmedi community centre in Model Town 'for more than a year'. An HRCP delegation had held meetings with Punjab Chief Minister Shahbaz Sharif to "apprise him of the situation and had demanded enhanced security measures to protect the vulnerable minority."

Jahangir said, "HRCP is of the view that the Punjab government apparently took some steps to bolster the security, but they were not enough to face the well-coordinated and well-planned terrorist attack as witnessed on Friday."

Today's incident was the first major strike in Lahore since suicide attacks in March which targeted the Pakistani military, killing up to 45 people. More than 170 people have been killed in Lahore in eight attacks over the past year.