'Pilots should focus on flying, not admin jobs' 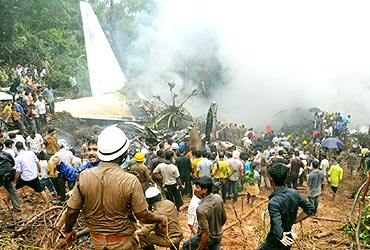 The Directorate General of Civil Aviation, which is probing the Mangalore air crash, is trying to ascertain whether the crash was caused by a technical snag or due to pilot error.

Vishwanath Mala, who was a pilot with Air India for 15 years, says that any investigation into such incidents should not only focus on the reasons for the crash, but should also suggest measures that ensure such incidents never occur. Interestingly Mala adds that an Air India pilot is not fatigued due to the flying hours, but due to the administrative tasks when is not flying.

Mala was with Air India between 1961 and 1998. He flew aircraft for 15 years and retired as a senior executive. He spoke with rediff.com's Vicky Nanjappa regarding the ongoing investigation and what the role of a pilot ought to be.

On recent flights, I saw the flight commandant receiving passengers at the entrance. I was shocked when I saw this. There is a crew dedicated for such work and I don't understand why the commandant is expected to do this.

What pilot fatigue are we talking about today? On a flight to Dubai the pilots get enough rest. I have flown the Mumbai-London route for several years. It is a 14-hour flight. The fatigue is calculated and accepted. All this is part of the job and we are trained to be ready for it. We are aware of the risk that we are taking while flying long hours and once the journey is complete, we took ample rest.

What bothers me however is that in Air India, 90 per cent of the pilots are in the office when they are not flying. They are doing administrative jobs at this time. That is not the job of the pilot. Their job is to fly and it is unfortunate that they get into these administrative jobs, keeping their promotions in mind. What tends to happen in such cases is that they do an administrative job, go home, rest a while and then fly. I feel that a pilot should only fly and in the remaining hours he should rest and not do any other job.

As pilots, they should only focus on flying. There is a need to change the manner in which the system works across the board.

I was very much part and parcel of the team which made various suggestions on the setting up of the airport. In 2006 when the new international terminal was inaugurated, I was a guest of honour. I had suggested that the runway be made a bit longer. However more than that what I wanted done was to lower the airfield and get more flat area. Further we had said that if the airfield was lowered then we could getan additional area of 3,000 feet. This is a 8,050 feet airfield and under normal circumstance there is nothing wrong. However, Mangalore is not a normal situation. It is a table-top with valleys on either side. Bearing this in mind, the authorities would have done well to lower the area.

The black box is mounted near the tail area of the plane, which is least impacted during a crash. It is the nose and wing areas which sustain the most damage during a crash.

However I think that the investigation had been very badly-handled so far. The first thing that should be done was retrieval of the bodies, which was done perfectly, but why wasn't the area cordoned off while search operations were on?

Everything from the position of the wing, the nose and the tyre are important aspects in the investigation. A crash site should be treated as sacrosant. During the retrieval of bodies many parts of the aircraft would have moved. Once this activity is completed, all the parts need to be put together so as to determine what exactly went wrong. Re-assembling the aircraft is very important since this helps determine how exactly the airplane was ripped open. If the area is not cordoned off and there is extensive movement, then there is every chance of losing vital parts which could hamper the probe.

Looking at the manner in which it is going at the moment, I am pretty sure that the investigation will be a shoddy job. There appears to be no honesty left and the entire effort it appears to be to hush things up and shift the blame.

Investigations should not aim at putting the blame or just ascertaining the reason for the crash. Investigators should think long term and suggest various means to avoid such unfortunate incidents in the future. 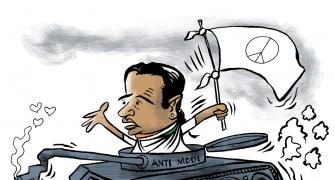