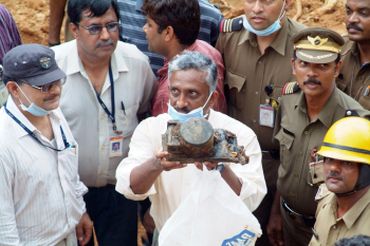 The black box of the ill-fated Dubai-Mangalore aircraft was found after three days of extensive search on Tuesday morning.

The search team found the all-important box after nearly a 60-hour search in the forested region near the Mangalore airport where the flight had crashed on Saturday.

Officials of the Directorate General of Civil Aviation said they were extremely happy and that the box would help in the investigation further.

The search team had to sift through the massive burnt wreckage of the plane in the heavily forested region near the Mangalore airport.

In its preliminary finding, the DGCA had stated that the crash could have been due to pilot error.

The DGCA is also probing another angle in the case -- there have been reports that the two pilots of the flight had refused to fly due to fatigue, a fact that has been denied by Air India.

The DGCA said the black box is in perfect condition and there is no damage.

The officials are hopeful of retrieving all data that the flight data recorder in the box had recorded, which will give a clear picture about the events that led to the crash.

The probe will take at least 15 days since the information has to be decoded. It is likely to be taken to New Delhi for decoding process.

The search team had taken the help of the forest department on Tuesday as the jungle where the plane crashed is infested with snakes and insects.

The team had resumed the search at 6 am on Tuesday, and found it at around 9 am.

The black box is, contrary to its name, painted orange in colour so that it is easily traceable after a crash.

The black box or the flight data recorder, which is mounted at the tail of the aircraft, can helps the probe team reconstruct the events that led to the crash. The box is surrounded by multiple layers of insulation and is water, fire and pressure proof.

Investigators had recovered the Cockpit Voice Recorder and Digital Flight Data Acquisition Unit in a damamged condition from the wreckage on Sunday.