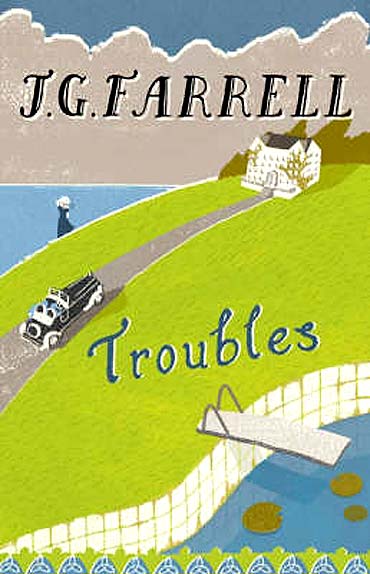 Forty years after it was first published, Troubles by late author J G Farrell has been announced as the winner of the Lost Man Booker Prize -- a one-off prize to honour the books published in 1970, but not considered for the prize when its rules were changed.

It won by a clear majority, winning 38 per cent of the votes by the international reading public, more than double the votes cast for any other book on the shortlist.

Troubles is the first in Farrell's Empire Trilogy, which was followed by The Siege of Krishnapur (1973) and The Singapore Grip (1978).

The Siege of Krishnapur won the Booker Prize in 1973 and was shortlisted for the Best of the Booker, a special award created to mark the 40th anniversary of the prize in 2008.

It is considered one of the finest British novels of the last 50 years, and narrates the story of the inhabitants of a colonial outpost in India, during the 1857 mutiny. The colonial masters are taken aback when the rebelling soldiers take them under siege, and the book reveals the true colours of the British imperialists as they face the wrath of their subjects.

Set in Ireland in 1919, just after the First World War, Troubles tells the tragic-comic story of Major Brendan Archer who has gone to visit Angela, a woman he believes may be his fiance.

Her home, from which he is unable to detach himself, is the dilapidated Majestic, a once grand Irish hotel, and all around is the gathering storm of the Irish War of Independence.

The winning book was voted for via the Man Booker Prize website, chosen from a shortlist of six books selected by a panel of three judges, all of whom were born in or around 1970.

The shortlist included The Birds on the Trees by Nina Bawden (Virago); The Bay of Noon by Shirley Hazzard (Virago); Fire From Heaven by Mary Renault (Arrow); The Driver's Seat by Muriel Spark (Penguin) and The Vivisector by Patrick White (Vintage).

Ion Trewin, literary director of the Man Booker Prizes, said, "Troubles is a novel of such lasting quality that it has never been out of print in the 40 years since it was first published. Had this been the winning novel in 1970, JG Farrell would have gone on to become the first author to win the Booker Prize twice."

The Lost Man Booker Prize was created to honour the books of 1970 which missed out on the chance to win the prize when it ceased to be awarded retrospectively and became -- as it is today -- a prize for the best novel of the year of publication.

The winner was announced by Lady Antonia Fraser, who was a judge for the Booker Prize in both 1970 and 1971.

The prize, a designer-bound first edition copy of the book, was accepted by J G Farrell's brother, Richard Farrell, on the author's behalf.