News
Business
Movies
Sports
Cricket
Get Ahead
Money Tips
Shopping
Sign in  |  Create a Rediffmail account
Rediff.com  » News » 'Why is Karzai hell-bent to reconcile with Taliban?'

'Why is Karzai hell-bent to reconcile with Taliban?' 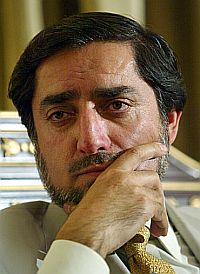 Echoing India's concerns over Afghanistan President Hamid Karzai's move toward reconciliation and reintegration of segments of the Taliban into the Afghan government -- which has been endorsed by the Obama administration -- Dr Abdullah Abdullah, erstwhile Afghan foreign minister and Karzai's nemesis, who was a candidate in the controversial 2009 presidential elections, said pursuing such a policy would be a futile exercise.

Abdullah, speaking at the US Institute of Peace, a Washington, DC-based think-tank that is partially funded by the US Congress on Afghanistan's future, said he couldn't comprehend why Karzai was 'hell-bent on such a policy to reach a rapprochement with 30,000 fighters of the Taliban, when he should be more concerned about the 30 million population of Afghanistan.'

Abdullah warned that "if we fail in that broader picture to address the needs, the expectations of the 30 million population," and in the meantime believe that the Taliban would give up arms and enter into a dialogue with the Afghan government, "that's wishful thinking."

"That again, is a diversion of attention from the main problems -- a sort of PR (public relations exercise," he added.

Abdullah said, "The biggest problem in Afghanistan today is the growing gap between the people and the government of Afghanistan and the leadership."

He argued that "the leadership in Afghanistan has failed to provide a clear path for the people," and address their grievances that range from ineffective governance to rampant corruption.

Abdullah also asserted that the international community "and its Afghan partner -- which is mainly the government of Afghanistan -- they are not on the same note as far as definition of the problem is concern."

During the question and answer session that followed his remarks, asked if he believed the Marja offensive launched by the US-led coalition forces with the support of the Afghan troops was a success, Abdullah said militarily it may have been so, but politically, it clearly wasn't; and may have alienated the people even more.

"In terms of the way that it started and what has been achieved militarily it was a success," he acknowledged, but "in terms of what followed in the political and government issues, it is not a success. Because now we see that the people have started complaining again and also Taliban are threatening the lives of the people."

Abdullah also said that "the internally displaced people have not returned back, they are still there. So, Marja was a big exercise but at the same time, the political part of it and issues of governance, there is absolutely a mixed picture. So, I cannot call it a success."

He predicted the same scenario would play out in the expected military offensive on the Taliban stronghold of Kandahar. "That why I emphasized the political aspect and other aspects of the Kandahar operation in that sense."

Abdullah said in the political component is missing, "and it repeats itself in the same way, we might end up with the same results," as Marja.