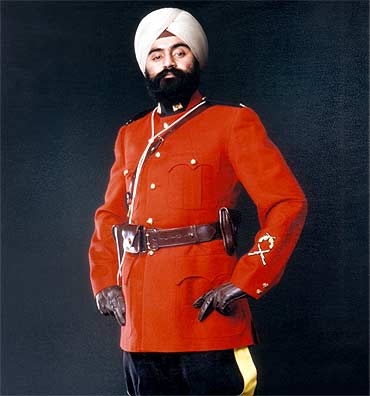 Baltej Dhillon, 42, the first turbaned Sikh to be admitted to the Royal Canadian Mounted Police speaks to rediff'com's Ajit Jain. He took his position amid racist campaigns, which included people bringing out lapel pins and t-shirts asking for the decision to be reversed. Dhillon now heads the RCMP's intelligence unit in Vancouver.

It has been 20 years since you were admitted to the RCMP. Tell us about your first days on the force.

The reactions to then prime minister Brian Mulroney's Conservative government allowing Sikhs wearing turbans to join the force were swift and mostly negative. But I had no fear of joining the force. Once I applied there was no going back.
The fear at that time was that having an RCMP officer with a turban instead of the usual stetson would weaken the RCMP. Those who opposed the change said this change would take away the identity of the RCMP and ultimately the identity of the nation on the international stage.

There were supporters who would come up to me to say 'we support you and keep up the good work.' There were others who took the middle ground and said they didn't understand the importance of turban in the Sikh faith. But they eventually understood the contributions that the Sikhs had made to the British Empire and the World Wars and that the Stetson was not really a Canadian symbol but an American symbol. Once that information was available to them they were comfortable with the change.

But the third category was the most interesting. People in this category were downright racists. In my case, they found an opportunity to anger the group that was ignorant and used the controversy to attack the Sikh faith and community in Canada. They continue to promote racism and spread hatred. There was a silver lining to this. It allowed us (Sikhs) a lot of opportunities to speak to Canadians at large about who we are and that we stand shoulder-to-shoulder with them to protect Canada.

The 20 years since then have passed in the blink of an eye. It has been a wonderful experience. I will continue to be with the RCMP for many years to come.

Did you ever have second thoughts about joining the RCMP?

How do people react to you now?

Earlier, someone from the crowd would always make a comment. People would also come up to me and congratulate me. But I notice the change now. I hardly see anyone say anything negative. There's lot of support with regard to the success and what we have been able to achieve for our community and the RCMP.

My sense is 20 years ago, members of the visible minority within Canada were tolerated, the same way you tolerate pain. It was not positive, but it was better than the earlier times when we didn't even have voting rights. We were becoming visible. I think from visible we have begun to move towards acceptance. We are no longer being tolerated, but accepted without any reservations.

I am now heading the provincial intelligence center and that's a priority in British Columbia. I have been given this because of my experience. But many years ago, even if I had the ability I would still not get the job. Today, while I am with other RCMP officers, nobody notices my turban.

Has acceptance reached the stage where you are just another Canadian making same kind of a contribution?

We are getting there, but it would be dangerous for us to let our guard down. Now, the fear has transferred from the minority member who lived in fear of his safety, the fear of not getting a job because of his color to the majority who are constantly on guard to ensure that they don't say anything wrong, don't behave in a way that can be construed as discrimination. I think we are now at a very precarious point. Earlier, you could deal with it because it was there in the open. Now, it is lying in a very murky, shadowy area and those people (racists) still exist.

You are saying there's still racism in the country?

Yes. But it is not easily recognizable because it is hidden under layers and they are very careful with words.

Any interesting encounters during these 20 years that you can discuss?

I have done everything from street patrolling to working as a community liaison officer devising strategies to prevent crime. I was also on the Air India task force for seven years.

What do you think of the Air India inquiry?

It was a challenging seven years.  It was not something that I was excited being part of, but I knew it was my duty.

Even after 25 years, there is no end to the agony of the victims' families?

It is very frustrating. I find solace in the fact that there is justice beyond the justice that is given in this world. Other than that it was a very frustrating time for me. It was a balancing act between doing what was right and following the laws of this country. My job involved investigating members of my community who, according to our evidence, were involved. I drew a lot of anger from my own community for being involved in the investigation. That was lack of maturity on the part of those people. They forgot that I am a good Sikh and I am also a police officer.

I am a police officer second and a good Sikh first. My job as a good Sikh is to always stand on the side of justice. And the oath that I took as an RCMP officer was secondary to the oath I took as a Gur Sikh. And it was not in contradiction or conflict of who I was as a man, who I was as Gur Sikh.

Any time there is injustice where innocent people are cold-bloodedly killed, I don't care even if he (the culprit) is my own child or father; justice is justice.

Many young people still have apprehensions about joining the RCMP or any law enforcement agencies. What would you tell them?

I would say forget those apprehensions. It is a job that brings dignity and honor to your family. The RCMP has allowed me to do that and it is an honorable organization as 99.9 percent of the people that I stand shoulder-to-shoulder with have very high professionalism, dignity and integrity. To be a part of such an organization has been a blessing.