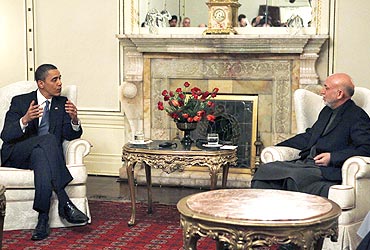 Afghanistan President Hamid Karzai will arrive in Washington on Monday to hold talks with the United States administration on a host of crucial issues.

Karzai's visit comes in the shadow of news that Taliban insurgents are planning a massive strike to counter Operation Hope by North Atlantic Treaty Organisation's forces in Kandahar.

According to a report by the Timesonline.com, Karzai, accompanied by senior ministers in his cabinet, will also try to mend relations with the Barack Obama-led administration.

Karzai has already been pulled up by Obama over the rampant corruption in the Afghanistan administration. But in a bid to pacify its important ally in the war on terror, Obama has reportedly instructed senior officials to treat Karzai with respect and stop criticising his government.

Karzai is scheduled to meet Obama on Wednesday, after holding discussions with US Secretary of State Hillary Clinton, Defence Secretary Robert Gates and other senior officials.

But the key topic that will be discussed between the two unlikely allies is Karzai's overtures to the Taliban, and his attempts at assimilating them into the mainstream administration.