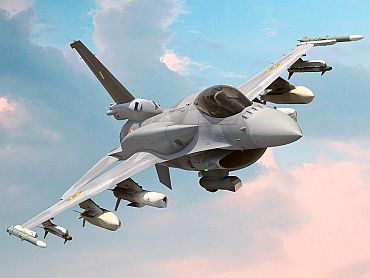 American aerospace giant Lockheed Martin on Monday assured India that the F-16s being offered to it would be "much more advanced" than the fighters provided to Pakistan.

"I can assure you, the Super Viper is much more advanced in all aspects than the F-16s being given to Pakistan," Lockheed Martin's Vice President-Business Development (India) Orville Prins told a group of visiting Indian media persons in Dallas.

The assurance comes in the wake of reports that India was concerned over US supplying a new set of F-16s to Pakistan, a decision that could be a crucial geopolitical factor when the Indian Air Force (IAF) decides on the $10 billion Medium Multi-role Combat Aircraft (MMRCA) tender, described as 'mother of all deals'.

"The F-16IN Super Viper will be more advanced than the F-16 Block 60 that were delivered to the UAE recently. The fighter jets being given to Pakistan by the US government are F-16 Block 50/52 aircraft," Prins said in Dallas.

However, the official said he would not discuss anything more about the company's dealings with Pakistan, except the fact that it was not the firm that was selling anything to any country, but was just partnering with the US Air Force.

In fact, Prins tried to defend the military sale of his company's fighter jets to Pakistan despite India's protest, saying it was not just Lockheed Martin that was supplying to Islamabad, but all the six contenders in the MMRCA race were, either directly or indirectly.

Other bidders in the MMRCA deal were US' Boeing, French D'Assault, Swedish Gripen, European consortium EADS, and Russian MiG.

The programme to deliver 18 F-16s to Pakistan, named as 'Peace Drive I', will raise the total number of F-16s ordered by Pakistan to 54.

Pakistan Air Force (PAF) had received its first F-16 in the Block 15 F-16A/B configuration in 1982, but it has been operating Lockheed Martin aircraft since 1963, when it received C-130B transport aircraft.

The Block 60 F-16, supplied to UAE recently, has a host of new systems that keep the fighter on the leading edge of technology.

The F-16IN Super Viper, on the other hand, will share fifth generation technologies that are currently available on the F-35 Lightning II Joint Strike Fighter and the F-22 Raptor, both Lockheed Martin products.

"The Super Viper could be described as the ultimate fourth generation fighter, tailored exclusively to meet or exceed all of India's MMRCA requirements," Prins said.

The Super Viper would have Northrop Grumman's APG-80 Active Electronically Scanned Array (AESA) Radar, the only operational AESA in the international market today.

"This revolutionary all-weather, precision targeting sensor has been exported by the United States government and is defending a sovereign nation today; no other MMRCA competitor can make that claim," he added.

The F-16IN would be powered by the highest thrust engine in the competition, the General Electric F110-132A, with 32,000-pound thrust and incorporates latest technology, including full authority digital engine control, for maximum fuel efficiency and performance.

N C Bipindra in Dallas
© Copyright 2022 PTI. All rights reserved. Republication or redistribution of PTI content, including by framing or similar means, is expressly prohibited without the prior written consent.