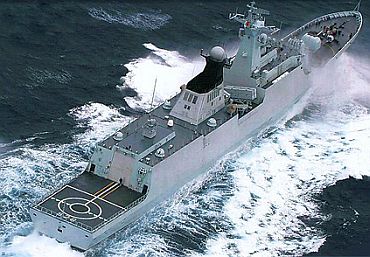 The Pakistan Navy on Friday fired missiles and torpedoes from warships, submarines and aircraft in an intensive firepower drill in the North Arabian sea, saying it was the message to "nefarious" forces, an apparent reference to India.

"While (giving a reassurance about the) Pakistan Navy's commitment of defending the motherland, this strike capability would also send a message of deterrence to anyone harbouring nefarious designs against Pakistan," a naval statement said after the manoeuvres.

The manoeuvres were aimed at assessing the lethality, precision and efficacy of weapon systems, the statement said.

Warships, submarines and aircraft carried out the "successful firing of a variety of missiles and torpedoes".

An important feature of the drill was the firing of sub-surface-to-surface missiles by Agosta 90B submarines.

"The target set was successfully engaged," the statement said.

Naval chief Admiral Noman Bashir, who witnessed the event, expressed satisfaction at the operational readiness of the Pakistan Navy fleet and commended officers and men for their commitment and professionalism.

The weapon firing zone, spread over hundreds of miles, was cleared of all merchant ships and fishing craft during a special operation to ensure the safe conduct of the drill.