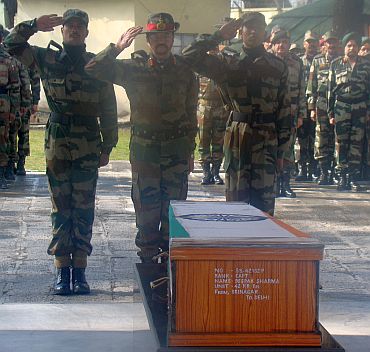 The body of Captain Deepak Sharma of the 42 Rashtriya Rifles, who was killed in an encounter in South Kashmir's Pulwama district on Thursday, was flown to his hometown Rohtak in Haryana on Friday.

The army officer was killed in a fierce encounter with four Hizbul Mujahideen terrorists in the Dadsara village of Pulwama district.

A defence spokesman said, "In a solemn and sober ceremony, at BB Cantt Srinagar, Captain Deepak Sharma was given the traditional military salute, as his mortal remains were to be flown back to his home town Rohtak."

"Lt Gen NC Marwah, AVSM, GOC Chinar Corps and other senior officers laid wreath on the coffin of the officer, who laid down his life fighting terrorists in the highest tradition of the Indian Army."

No new IIMs this year?