Chandrayaan-II may be launched by 2013: ISRO 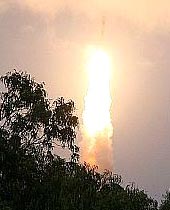 K Radhakrishnan, chairman of the Indian Space Research Organisation, has said that India is preparing to launch its second moon mission Chandrayaan-II by 2013.

"The Chandrayaan-II we are planning to have in the year 2013. By that time, we should have our GSLV (Geosynchronous Satellite Launch Vehicle) flying with the Indigenous Cryogenic Engine Stage. That is the target with which we are working," said Radhakrishnan.

Radhakrishnan said some snags have been identified in flight-testing of the Indigenous Cryogenic Engine, which are being analysed and would be sorted out in approximately a year.

"We went through a very detailed analysis as to what happens and why it happens and we have come to a couple of scenarios in which such a snag would have occurred. Our immediate task is to confirm that through testing on the ground and then prepare for the next flight testing. This should happen in a year from now," he added.

The Chandrayaan-II is the second unmanned lunar exploration mission that ISRO is pursuing.

Chandrayaan lifts off from Sriharikota