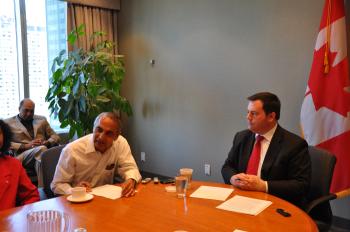 What repeatedly came out was how could the Canadian government allow activities of fringe, but extremist elements in the Canadian Sikh society that are still propagating for Khalistan and in the guise of religious events they are glorifying  people like Jarnail Singh Bhinderwale, Talwinder Singh Parmar and others.

In a subsequent interview with India Abroad, Kenney said "extremists identified with the Khalistani movement decided to make the political point through this (Air India) bombing".

Regardless of their history or their culture "they can't bring to Canada extremism or violence or hatred and these kinds of attitudes and actions are totally unacceptable in Canada," he said.

"By coming to Canada, people are making a commitment to be peaceful and law abiding and not to import violence and extremism to this country."

He conceded that "certain forms of extremism still prevails (in Canada) in some religious institutions and this is not limited to one community" and so while discussing extremist elements, Kenney didn't want to "focus only on the Air India bombing."

So, he wanted the Air India report "as an opportunity to more broader address the issue of national security and issue of social cohesion in Canada."

The Canadian minister discussed what has come to be known as group of 18 (18 young Muslims who allegedly had targeted some major land markets like the CN Tower for terrorist attacks): "That group in many ways was analogous to extremism that led to Air India bombing."

Kenney agreed that the Canadian authorities "have to do a better job of conveying to Canadians  whether they are Canadians or new Canadians  that no religious doctrines justify violence, particularly violence against innocent civilians and that crimes are crimes and terrorism is terrorism no matter what kind of religious justification you try to defend your ways."

At the roundtable with the families there was repeated reference to religious freedom under Charter of Rights and freedom.  That's the pretext Sikh and other extremist elements use to justify glorification of terrorists like Parmar, keeping their portraits in Gurdwaras and making the congregation comprising of peaceful and law-abiding citizens to pay homage to the terrorists.

"You can try and glorify terrorists in a religious venue but they are still terrorists and this is something we try to convey," he told IA.

"Obviously there's the Charter guarantee of freedom of religion.  So, one thing I hope comes out of this (Air India) report is that the political gamesmanship with extremist elements stops for good.  And that we no longer see people going on the stage and going to the events where they absolutely know there's glorification of terrorists"

This is what members of the Air India victims families are asking for, Kenney stated.

At the 25th anniversary of this mass murder of 329 people, who were on board Kanishka flight 182, Kenney said political leaders "must send a zero-tolerance message towards the glorification of terrorists or terrorism.  If one political lesson to be learnt (at this juncture) this is the lesson" of zero tolerance.

That should be the responsibility of the leaders of political parties to ensure their caucus members don't attend events where there's glorification of terrorists as it happens so often in Surrey and other places during the Baisakhi parade.
Kenney said "we certain have this rule in our Conservative Party caucus."

In this regard, he explained there was a story on the CBC three years ago "about problematic event in Surrey (British Columbia).   And since then no member of our party, our caucus has gone to attend that (parade)," Kenney stated.

But he has concerns about other political leaders who themselves don't go to such events but would almost wink at their members going there: "What concerns me that leaders of some of the political parties will take a responsible position  but then allow their  caucus members to play a double game."

Kenney said he spoke with the Premier of British Columbia, Gordon Campbell, with Liberal MP Ujjal Dosanjh and others telling them 'we have a common interest in taking a common position on these issues (stand against glorification of terrorist)' and "most of them agreed but regrettably there are some persons who do not."

In this regard, he singled out Liberal MP Sukh Dhaliwal (Surrey, British Columbia). "He has no scruples and I think he's willing to chase favors without any regard for the Canadian values and that's very unfortunate."

He complimented Ujjal Dosanjh for "doing it with members of his own party" telling them not to attend such events with extremist elements behind organizing those religious events.

He puts the onus on the shoulders of leaders of the political parties "to put down his foot and say 'if you continue to give credence to events or organizations that glorify terrorists you will no longer be representing my party."

That, Kenney suggested, "should be a consistent position for left to right and from east to West."

After the roundtable with the families, he told the media that the Air India enquiry report runs to 4,000 pages and so it has to be reviewed and that will take some time.

"This government will take some time to closely analyze the report and some out with recommendations on implementation so that we could learn from the mistakes made.'

"The families still grieve over this tragedy, over the worst act of murdering in the Canadian history, worst act of terrorist and so the families would grieve as well as Canadians. These crimes occurred because of extremism, extremist elements that decided to punish innocent civilian for their hateful, violent, perverse ideology which has no place in free and democratic society like Canada."

Prime Minister Harper met the families on June 17, soon after Justice Major released his report: "They have clear focus in ensuring that the kind of hateful extremism that led to these murders has no place to take root in Canada and I can assure you Prime minister Harper is doing everything he possibly can to improve our practices with regard to the national security but also integration to ensure that violent and extremist ideologies are not allowed to operate in Canada and are not given credibility or resources from the government.'

Kenney said his government will "continue to take advice from the victims' families how to marginalize those who would impose their hateful and violent extremist ideologies on innocent Canadians.'

Image: Jason Kenney listen to observations made b y Dr Bal Gupta (left), who's the leader of the Air India Vcitims' families association in Toronto.