Israel to ease blockade on Gaza Strip amid global pressure 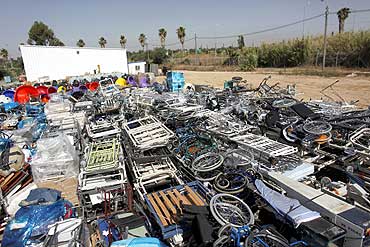 Israel on Thursday agreed to ease its land blockade on the Gaza Strip in a bid to quell mounting international criticism following a bloody sea raid on an aid flotilla bound for the Hamas-run territory.

"It was agreed to liberalise the system by which civilian goods enter Gaza (and) expand the inflow of materials for civilian projects that are under international supervision," the government said.

Bowing to mounting international pressures in the wake of a deadly raid on Gaza bound aid flotilla, Israel's cabinet on Thursday expanded its list of approved products that can enter the coastal territory to include all food items, toys, stationery, kitchen utensils, mattresses and towels.

The decision, however, does not loosen Israel's tight grip on the sea route with naval blockade in place and also does not remove the ban on private import of building materials, vital to wide scale reconstruction of the war ravaged territory.

Israel is wary that an unrestricted import of cement could lead to Islamist group Hamas seizing the material and using it to rebuild military infrastructure.

It currently allows limited quantities of construction material to enter the Hamas-ruled Palestinian territory for United Nations projects. The procedural issues on easing of three-year-old blockade are, however, still not clear and it is likely to take a few more days to become clear.

"Existing security procedures to prevent the inflow of weapons and war material" would continue, the government said in a statement.

Israeli Prime Minister Benjamin Netanyahu's office said in a  statement that Israel would "liberalise the system by which civilian goods enter Gaza" and "expand the inflow of materials for civilian projects that are under international supervision".

But the government noted that Israel would "continue existing security procedures to prevent the inflow of weapons and war materiel" to the 1.5 million populated Gaza Strip.

European diplomats have recently said that a plan drawn up in coordination with Quartet Middle East envoy, Tony Blair, called for Israel to move from a policy of banning the entry of many commercial goods, except a few designated items, to accepting all products and prohibiting only those proscribed on a list.

Hamas, which controls the Gaza Strip after vanquishing Palestinian Authority troops in pitched battles in June 2007, dubbed the Israeli measures as "media propaganda".

Hamas spokesman Sami Abu Zuhri said some of the goods that will now be allowed in were "trivial and secondary".

"What is needed is a complete lifting of the blockade. Goods and people must be free to enter and leave. Gaza especially needs construction material, which must be allowed to come in without restrictions," Abu Zuhri said.

Israel faced mounting international calls to ease or lift its Gaza embargo following the death of nine pro-Palestinian Turkish activists aboard a Gaza-bound aid ship on May 31.

Israeli leaders said that the troops acted in self defence after being attacked by knife wielding activists and justifies the blockade by calling it necessary to prevent arms smuggling to Hamas.

The cabinet's deliberations began on Wednesday and coincides with another low key visit to Israel and the Palestinian territories by special US Middle East envoy George Mitchell. Mitchell is mediating indirect talks between Israel and West backed PA President Mahmoud Abbas.

Israel imposed blockade over the coastal Strip after Hamas took control over it June 2007.

However, it transfers humanitarian aid shipments regularly via border crossings. A network of smuggling tunnels under the Gaza Strip's border with Egypt also keeps the enclave supplied with a variety of black market commercial goods.

Image: Wheelchairs and other items, that were aboard Gaza-bound ships which were intercepted by Israeli forces, are seen at a military storage facility near Tel Aviv, on June 7.

Harinder Mishra in Jerusalem
© Copyright 2020 PTI. All rights reserved. Republication or redistribution of PTI content, including by framing or similar means, is expressly prohibited without the prior written consent.