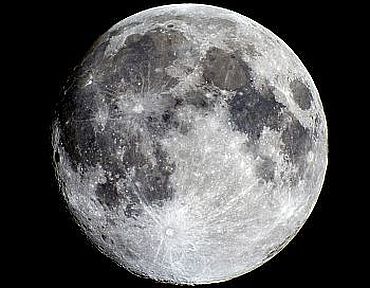 Moon has hundred times more water than was previously thought, and it could be widespread deep under its surface, planetary scientists have claimed.

A US-led team has found that there is at least 100 times more water in the moon's minerals that was previously believed -- in fact, the scientists have based its findings on an analysis of the mineral apatite in lunar rocks picked up by Apollo space missions and in lunar meteorite found in Africa.

'Water may be ubiquitous within the lunar interior,' planetary scientists wrote in the Proceedings of the National Academy of Sciences journal.

'For over 40 years, we thought the moon was dry. We found that the minimum water content ranged from 64 parts per billion to 5 parts per million -- at least two orders of magnitude greater than previous results. Or another way of looking at it -- if you took all of the water that was locked up inside the rocks of the moon and put them on the surface, it would make a metre-thick layer covering the moon,' Francis McCubbin of Carnegie Institution of Washington, who led the team, said.

According to the study, the water is not immediately accessible -- it is incorporated in the rocky interior of the moon, the media reported.

The scientists explained that the moon most probably formed after a Mars-sized space body collided with the young Earth, some 4.5 billion years ago. The high-energy impact produced molten debris, which eventually cooled to form our planet's only natural satellite.

Back then there was a magma ocean on the moon. Magma contained water, which eventually erupted via 'fire fountains' on to lunar surface and most of this water evaporated during the volcanic activity -- but some of it stayed, said McCubbin.

'I like to use the analogy of someone who's trying to make non-alcoholic beer. There's always going to be some alcohol left," he explained.

In their study, the scientists looked at samples collected 40 years ago during Apollo moon missions. The kinds of rocks that'll be more common in the interior carry chemical evidence of hydrogen and oxygen compounds that point to water.

'The concentrations are very low and, accordingly, they have been until recently nearly impossible to detect,' Bradley Jolliff of Washington University in St Louis, who worked on the study, said in a statement.

'We can now finally begin to consider the implications and the origin of water in the interior of the moon.'

KRN's life was a saga of surprises

UK hospital told to prep for COVID vaccine by Nov

India, US to ink landmark defence pact on Tuesday