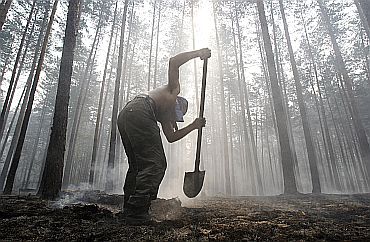 Tens of thousands of firefighters, including soldiers, on Saturday battled forest fires raging across Central Russia that is posing threat to over 200 villages and towns, with Russian Prime Minister Vladimir Putin describing the situation as 'grim'.

"Wildfires are threatening more than 200 villages in the Russian regions of Voronezh, Moscow, Nizhny Novgorod, as well as in the republic of Mordovia (Volga region)", chief of National Centre for Crisis Situations Gen Vladimir Stepanov on Saturday told a meeting chaired by Putin.

The hastily arranged meeting was called to take the stock of the situation as already 77 villages and towns have been fully or partially turned into heaps of ashes, leaving 30 people dead.

"The situation we have with wildfires remains difficult, on Thursday night and Friday morning we had to counter some grave consequences in some regions, the situation has been stabilised a bit. However, on the whole, it remains grim," Putin said at the meeting televised live by state-run Rossiya 24 channel.

According to the emergencies ministry's figures on Saturday morning, forests over an area of 121,500 hectares are ablaze even as army has been called in to assist over 240,000 fire-fighters and volunteers.

"Over the last 24 hours, 1,257 homes have been destroyed in the largest wildfire ever to hit the European part of Russia," Putin said.

Since July 29, in the Nizhny Novgorod region alone 575 homes were burned and 1,500 people were evacuated. Emergency situation has been announced in 14 regions in Russia.

Putin, who on Friday released huge compensation funds, ordered the governors of affected areas to build homes for 'each and every' family by October.

Due to dry and windy weather more than 22,000 fire islands have been registered in the Central Russia. According to EMERCOM, 240,000 people are battling the wildfires and that 25,000 pieces of equipment are being used throughout the regions, including 64 special fire-fighting aircraft, almost whole air fleet of the emergencies ministry.

However, the governors of Nizhny Novgorod and Ryazan in their video conference with Putin said the fire-fighting air fleet remains grounded due to low visibility caused by dense smoke and smog from the forest fires.

The military, which is facing an uphill task of protecting its own arsenals and ammunition dumps from the wildfires, have joined the rescue efforts.

"We have put in everything we have, including all of our fire brigades," Defence Minister Anatoly Serdyukov told President Dmitry Medvedev.

The emergencies ministry is sending 100 paratroopers from Siberia, who are trained in fire-fighting, to the Nizhny Novgorod region, RIA Novosti reported.

Image: A firefighter works to extinguish forest fires on the outskirts of the Russian city of Voronezh on Saturday