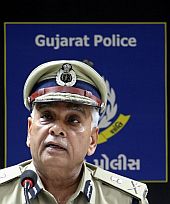 CBI has called Pandey to appear before it on August 11, CBI officials said on Wednesday night.

Pandey was DGP when the state CID was investigating the fake encounter case.

There have been allegations that some police officials of Gujarat had tried to influence the investigation into the incident.

This is for the first time Pandey has been called for questioning by CBI. It had earlier called other IPS officers, including G C Raigar and O P Mathur, for questioning in the Sohrabuddin case.

The Supreme Court handed over the fake encounter case to the CBI in January this year. The investigating agency has so far arrested former minister of state for Home Amit Shah, IPS officer Abhay Chudasama and owners of Arham farm Rajendra Jirawala in the case.

CBI on Wednesday interrogated Shah inside the Sabarmati jail.