'I don't see pure milk-and-honey goodness in the poor' 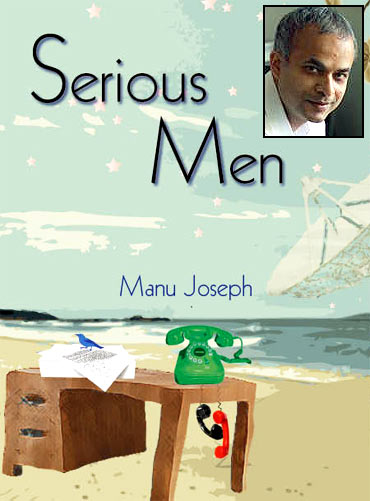 Journalist Manu Joseph's debut novel Serious Men is about an extremely intelligent but crooked man whose obsession is to make his son be known as the first Dalit genius. He works in a science institute that is top heavy with Brahmins.

The story is about whether Ayyan Mani manages to convince the world that his son is a genius, and what role Arvind Acharya, the science institute's chief, plays in it.

Joseph, who takes over as editor of the year-old Open magazine in August, grew up in a Brahmin neighbourhood in Chennai, and spent two years in a Mumbai chawl. The book is full of sharp observations from these two worlds.

In this interview with Rediff.com's Krishnakumar Padmanabhan, he speaks about 'very smart Dalit males', absent-minded scientists, and how different literature is from journalistic writing.

For a Christian who grew up in a Brahmin neighbourhood, how was it getting into the head of a Dalit character?

As a journalist I have met several Dalit men, many times for stories that have nothing to do with Dalits. I was always aware of a particular kind of a very smart Dalit male and the way he thinks or at least the way I think he things.

Also, when I first came to Bombay I lived in a chawl for two-and-a-half years. There I met some men whose views are very similar to Ayyan's. But the fundamental angst of Ayyan Mani and his perception of the world, life and science is my conjecture, my creation.

You mentioned 'very smart Dalit male'. What sets him apart?

What sets him apart is that he is a mathematical probability.

In a set of so many people, one will be exceptional irrespective of culture, family background or upbringing.

That anomaly is Ayyan Mani. He is not a product of his own culture. He is a freak, in a way.

I say that about Ayyan Mani even though some of his traits are borrowed from the men I used to know.

Was it essential for the protagonist to be a Dalit or is it just incidental?

Then I asked myself, why is he so angry, can I give him a justification? And the idea of a Dalit male who is trying create from thin air the first Dalit boy genius just fascinated me.

But yes I am surprised that everybody seems to be talking about the fact that Ayyan is a Dalit while I think that is the least important detail of the novel.

Did making him a Dalit also in a way enable you to weave in a bit of social commentary?

A novel is a great literary device. It is a story that is told in the chosen style of the storyteller. I think social commentary, etc, are extractions of book reviewers. Which in turn has become a concept. Which in turn has made writers feel they should make a socially comment.

You mentioned living in a chawl. How did you fit in? Was it in a way far more egalitarian than say a society of flats elsewhere? How did the residents view you?

Oh no. I won't say that at all. I am not among the people who see pure milk-and-honey goodness in the poor.

I remember bitter people in the chawl. I can imagine some NRI writers observing the chawl boys laughing or playing cricket and saying, 'the spirit of Bombay' or some shit like that. That is all rubbish.

People laugh because they have the muscles to laugh. So yes, men and women do laugh in the chawls. But they are like anybody else. They would like to be elsewhere. It is just that they are used to living in such a small space.

What would your protagonist have been had you not had the opportunity to experience life in a chawl?

He wouldn't have been different?

No. Ayyan had to be of a particular kind. His exceptionality comes from the fact that he is from a certain background yet has a way of thinking. Some reviewers wonder if Ayyan can really have the views that he has. I say, yes.

Once you take the English out of his thoughts. You see that what is left is the complicity of a thought and not the sophistication.

Ayyan Mani is special to me because he is a man who has the gift of real intelligence.

What kind of work went into the writing of the science parts?

I have always been very curious about science. And I have always thought that in the modern world where nobody really gets away -- not the economists, not the leftists not the rightists, not even Arundhati Roy or the Pope or even Obama -- one type that gets away almost with anything are scientists.

That is because science today is so complex that one has to know a lot to question scientists otherwise they will insult you with jargon.

I have always found this power, this power that scientists have very fascinating. A scientist today can actually be just a dumb guy, but if he is an astrophysicist people will think he must be smart.

So it was inevitable that I would tell the story of such scientists, their inner workings their insecurities and subterfuge.

So there is the Institute of Theory and Research and the battles inside -- a war over the best way to search for alien life -- the idea fascinated me. And I wanted this battle to be interpreted by a guy from the chawl.

But in some other ways, has the book not ended up stereotyping science people?

I am very surprised at that thought. What are the stereotypical attributes would you say?

Aravind Acharya forgetting some 'thing' (his wife) in the car. The way they are at their jobs. The jargon-filled discussion of the scientists...

At Acharya's level it is not surprising that he would be a bit absent-minded. If we look at the real lives of some top scientists we see more bizarre stories. But I do agree with the jargon of some scientists. I think that need not have been there. I agree.

In fact this point, I first realised when I was reading Solar by Ian McEwan and I thought how naive it was for a scientist to think of everything only in scientific terms. How naive I thought. Then I realised a bit of that is there in my novel too.

Were you happy with the way the women characters had turned out? Isn't the sex ratio in the book a little skewed? Also, aren't they -- apart from Oparna -- a bit sketchy?

The novel's primary objective was to tell the story of two interesting men -- unequal men who become allies. But at the same time, the men in the novel are deeply influenced, affected or motivated by women.

One can say that the Taj Mahal was built by a man. That would be a fact. But that would be incomplete. So, to call Serious Men a male novel would be correct but only partly.

What I mean to say is that it has a strong female influence and the male characters are very aware of women. So while it is true that there only one strong female character, there is always this feminine presence in the novel, at least that is what I feel.

You are a journalist, you have written a screenplay, and now a novel. How different are they? Or is the process the same?

There are some fundamental things that are the same between journalistic writing (an under-rated form of literature), screenplay and a novel.

As in a writer observes a set of facts in his own unique way. It is in the presentation of this observation that the three literary devices vary.

Interestingly, all the three have borders, boundaries that control the writer. In a feature, facts do the job. In a screenplay you can only say what is visually depictable. And in a novel (which is the most complex form of the three and the most satisfying to accomplish), characters are the borders.

A character or characterization, according to me, is a set of rules. What are the things Ayyan will do, will not do, will say, will not say. That is characterisation and that is the boundary of the novel.

Why haven't great non-fiction books come out of Indian journalism? Even fiction, there have been very few quality novels from journalists...

There is no money in Indian publishing.

A great work of non-fiction needs a lot of time and Indian publishers cannot pay a decent amount for it. And foreign publishers may not be interested in a book like this, even if it is very, very good.