Why Omar Abdullah has failed as chief minister 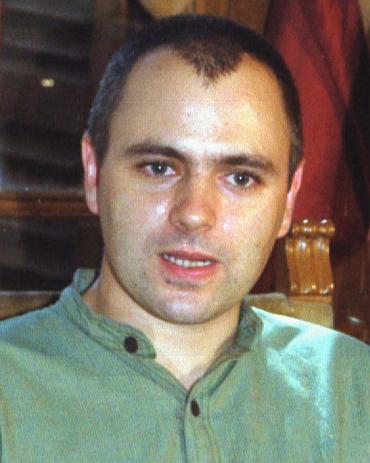 He was supposed to be the wonder boy of Indian politics. Neerja Chowdhury finds out why Omar Abdullah has failed as Jammu and Kashmir chief minister.

It was Atal Bihari Vajpayee's dream to leave his imprint on history by helping resolve the Kashmir tangle, and he undertook the famous Lahore yatra to create a thaw between India and Pakistan.

It has also been Dr Manmohan Singh's dream -- from all accounts he wants to use his second term in office to normalise relations between India and Pakistan -- to bring peace to the troubled state of Jammu and Kashmir.

The popular participation in the 2008 winter elections in the state had belied all expectations. Hopes of a solution to the Kashmir problem rose with the installation of Omar Abdullah as chief minister. He represented youth, a fresh face, a break from the past and yet continuity, being the scion of Kashmir's first family -- the Abdullahs.

But in less than two years, the state has been plunged back into turmoil. Omar Abdullah had to call the army recently, signaling that he no longer had a grip on the situation.

Somewhere down the line, Omar lost the plot, and in some ways, his troubles have stemmed from a lack of political maturity which has been evident in his decisions.

Considering that Omar became chief minister in an overnight development, when all through the election campaign, it was his father Farooq Abdullah who had been projected as the National Conference's chief ministerial candidate, anybody with more experience would have given the traditional leadership of the party more importance, after becoming CM.

He had nothing to lose by seeking the advice of the party's senior leaders, to keep them on his right side. Instead, he is charged with relying on a coterie of non-political elements around him.

Omar has admitted to having a 'disconnect' with his party. It is not as if the junior Abdullah was a complete stranger to the National Conference and its ways, after all he was the party president before he took over as chief minister.

Congress leaders lament that often he did not bother to consult them, or keep them in the loop on developments and decisions, although he was in Delhi every weekend to be with his family. Senior politicians complained that when they went to meet him, he would often be playing games on his phone!

Irrespective of his antagonism towards his arch opponent Mehbooba Mufti, Omar could not neutralise her hostility towards him. A chief minister needs the leader of the Opposition's help in many ways to run a state.

Omar's decisions to appoint judges to the State Accountability Commission, when Mehbooba, also a member of the commission, was away on a pilgrimage, only served to heighten the animosity between the two.

When Omar was in Delhi as a Union minister, he was envied for the way he had the media eating out of his hands. The national media still adores him, but in the last year Omar has antagonised the Kashmiri media, which has only compounded his problems.

It is another matter that the National Conference and the Congress decided to close ranks and stand solidly behind him, thanks to Mehbooba Mufti's decision to boycott the all-party meet last week. The People's Democratic Party did not want to identify with the all-party meet called by the chief minister because all the anger in the valley is now directed at Omar Abdullah.

It is a well known secret that the Congress was divided on his handling of the Kashmir situation, and this was clear from the army chief General V K Singh's remarks. General Singh's admission that it was not necessary to call in the army showed that a section of the central leadership was not in favour of the decision. The army chief could not have otherwise made a statement like that.

General Singh's assertion that the civilian government in Srinagar had frittered away the gains made by the army over the years was seen as a pre-emptive counter to any attempt that the Omar Abdullah government might make to deflect the anger from itself towards the army.

It is surprising that someone as intelligent and upright as Omar should not have tread more cautiously. Omar may believe that because he had the backing of Rahul Gandhi, he need not bother about engaging with the different players in J&K's polity. Rahul Gandhi, on the other hand, has been super careful about not showing haste to grasp power or rub senior Congressmen the wrong way.

As for the central government, it took the improved situation in the state as an end in itself and not as an opportunity to further the process of peace and dialogue.

The 26/11 attacks which hardened the public opinion in the country, ruled out any dialogue with Pakistan. Delhi had to keep insisting that there could not be a move forward until Pakistan proved its sincerity by bringing to book those responsible for the Mumbai blasts.

Though the recent weeks have seen some progress with the talks held at different levels, in order to address the 'trust deficit' between the two countries, there is no real breakthrough yet.

Today Jammu and Kashmir could do with the touch of an experienced hand, to apply a soothing balm and calm an agitated people, moving the situation towards normalcy so that the resumption of the political dialogue can take place.

It was strange to hear senior Congress leaders speak nostalgically about the way Mufti Mohammed Saeed had taken along different sections as part of his 'healing touch' policy.

To have Mehbooba Mufti suddenly give 'some credit' to her one time bete noire Ghulam Nabi Azad as chief minister, while comparing him to Omar Abdullah.

To have the media, which had once dismissed Farooq Abdullah as a 'playboy', suggest that it would be better if the father and son swapped roles!

A takeover by Farooq Abdullah would mean the end of the road for Omar, which is something the People's Democratic Party would love to see. An alternative arrangement looks difficult for the Congress cannot concieve an alliance with the PDP as it would provoke a backlash from Jammu.

Since the coalition arrangement reached in 2008 did not include sharing the chief minister's chair -- as it was in 2002 -- the Congress cannot hope to take over in 2011. Imposing President's rule will only worsen the existing situation.

The Congress is left with no option but to stick with Omar and hope that he will pull up his socks and take corrective steps to restore normalcy.

ALSO READ: Explained: Why Kashmir is burning
In Kashmir, pelting stones for a price
First comprehensive study of America's role in Kashmir'

Can we move on from Pakistan, Mr Prime Minister?