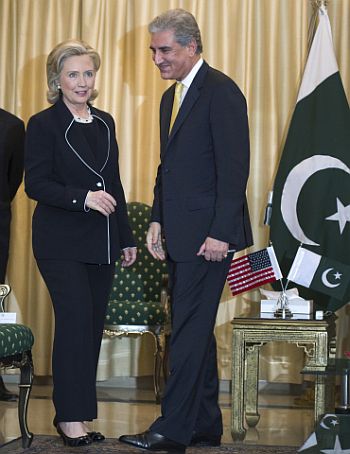 The United States has reportedly persuaded the foreign ministers of India and Pakistan to continue the dialogue process, and meet again on the sidelines of an international conference in Kabul on Tuesday.

According to reports, US Secretary of State Hillary Clinton has talked to Indian External Affairs Minister SM Krishna as well as his Pakistani counterpart, Shah Mehmood Qureshi to raise the prospect of another "talk about talks".

Afghanistan President Hamid Karzai and UN chief Ban Ki-moon are to chair the conference, to be attended by up to 70 international representatives, including about 40 foreign ministers -- led by Clinton.

The conference will discuss the future of Afghanistan.

Clinton, who spoke to Krishna on Saturday, said she wanted to meet him separately at the summit, saying that she also 'disapproved' of the tone and tenor of Qureshi's language and behaviour during his interaction with the Pakistani media, The Daily Times reports.

The Secretary of State is believed to have told Krishna that she wanted to see the resumption of talks between India and Pakistan, and assured that Pakistan was being persuaded to take 'credible action' against the perpetrators of the 26/11 Mumbai terror attacks.

Clinton is currently in Islamabad on a two-day visit, which will focus on economic aid, and Pakistan's role in the war against terrorism in Afghanistan.