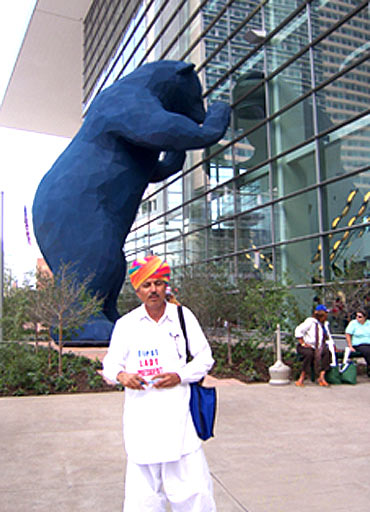 For the past two years, US political pundits have obsessed over how and why the seemingly unstoppable Hillary Clinton presidential campaign was tripped up by an almost unknown junior US Senator from Illinois, Barack Obama.

But according to one self-published Indian fiction writer, the answer is simple: She didn't read and take to heart his novel, First Lady President, while Obama did.

The author is Inder Dan Ratnu, a Jaipur-based historian who has also penned three books.

Inder's most recent work, First Lady President, which he says was first published in 2003, tells the story of former US first lady Beverly Hilton (strongly modelled on Hillary) and her hope to become US president in 2008. Along the way, she picks up an African-American US Senator from Illinois, Charak Sudama (strongly modelled on Barack), to be her vice presidential candidate. In the book, running on campaign themes like 'Anti War' and 'Change', Beverly Hilton becomes America's first female president.

In real life, of course, Obama and Hillary did not combine forces to run on one ticket, as Obama managed to defeat Hillary in the Democratic primary to become the party's candidate against Republican John McCain. And Obama selected Joe Biden as his vice presidential candidate, not Clinton.

Inder claims that he provided both campaigns copies of the book in the run-up to the election, adding that he was essentially ignored by Hillary's office. Meanwhile, he feels the Barack Obama team happily incorporated the 'Anti War' and 'Change' messages from Charak Sudama into their own campaign, all the while not giving proper credit to their creator -- Inder.

On Inder's web site, he documents -- in long-winded, painstaking detail -- his claims to have influenced the Obama campaign, and of his whole Oracle-esque abilities.

It appears that Inder has been trying to get media attention on this story for some time, with little luck. But now popular politics blog Wonkette has given First Lady President a shout-out, even asking (tongue-in-cheek) if Inder managed to single-handedly create the entire Barack Obama phenomenon.

You can read more of Inder's claims on his web site.

Paul the Octopus, eat your heart out!

Image: Inder Dan Ratnu outside the Democratic Party's convention hall at Denver, Colorado, in 2008, with a copy of his book. Image courtesy: http://www.firstladypresident.net/