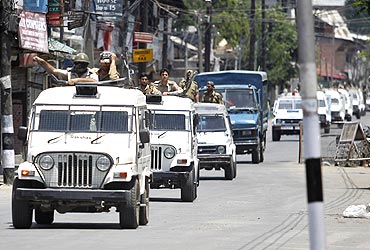 After days of calm, fresh violence erupted in Srinagar leaving three persons dead following which indefinite curfew was clamped in Srinagar on Tuesday.

A senior police officer said Fancy Bano (25) was killed when security forces opened fire to quell the violent mob in the Batmaloo locality of Srinagar on Tuesday afternoon.

The woman had been shifted to a city hospital in critical condition. However, doctors declared her dead on arrival.

Fancy had received a fatal bullet injury in her chest during the protest. The body of the woman was handed over to the relatives. As the body reached a surcharged Batmaloo, residents abandoned their homes and came out on the streets shouting anti-India and pro-freedom slogans, and pelted stones at the security forces.

The protests had begun in the area late Monday night when a group of men started throwing stones at a security contingent. While security personnel were chasing the protesters, one of them -- identified as Muzaffar Ahmad -- fell into a drain. His body was later fished out. The death triggered a fresh round of protests on Tuesday morning with a mob hurling stones at CRPF and local police present in the area.

Mob violence spread to most areas of Srinagar with security forces firing warning shots and using tear smoke and baton charges to restore order. A government vehicle was torched by a mob in the Gogjibagh locality on Tuesday afternoon.

Moderate All Parties Hurriyat Conference (APHC) chairman, Mirwaiz Moulvi Umar Farooq led hundreds of his supporters in the old city where he staged a protest sit-in and later led a march. He condemned what he said human rights violations in Kashmir.

Meanwhile, loudspeaker mounted police vehicles are announcing curfew in the city and asking people to return to their homes immediately. The curfew warning seemed to have little effect on protestors, who are engaging security forces in clashes in uptown and old city areas.