AP CM in Delhi to discuss Jagan, Chiranjeevi with Sonia 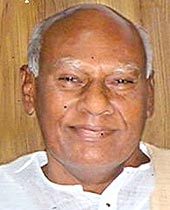 Andhra Chief Minister K Rosaiah on Friday arrived in Delhi to meet Congress chief Sonia Gandhi to discuss various issues including the controversial padayatra undertaken by party leader Jaganmohan Reddy, expansion of the state cabinet and the selection of candidates for the by-elections in the Telangana region. He is also expected to raise the issue of Praja Rajyam leader Chiranjeevi's increasing proximity to the Congress.

Incidentally, Gandhi has recently met Jaganmohan, the son of late Andhra chief minister Y S Rajasekhar Reddy. Jaganmohan had attracted the Congress top brass's ire after he defied their diktats and went ahead with his padayatra. He had then rushed to the capital to explain his actions.

KCR warns of civil war if Telangana is denied