Telangana stir spills over to the cricket field 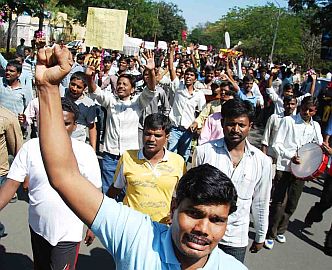 Even as the normal life remain derailed in the Telangana region on second consecutive day on the call of strike by Students Joint Action Committee, the trouble spread to the sporting arena on Thursday.

In the first incident of its kind, about 100 pro-Telangana agitators stormed the Rajiv Gandhi Stadium in Hyderabad and disrupted the Deccan Twenty 20 match between Andhra and Hyderabad cricket teams on Thursday.

The slogan-shouting demonstrators raided the pitch about one hour after the inaugural match started and had a scuffle with the policemen. The situation could be brought into control only after the Rapid Action Force personnel also joined the efforts to vacate the agitators and send them into police custody.

As the agitators entered the field, members of both teams scurried into the stadium for safety.

Forty-five students and 10 policemen, including a sub inspector of police, were injured in Wednesday's clash in the Osmania Campus over the issue of taking out funeral procession of a boy, who had committed suicide over the issue.

With Andhra Pradesh Road Transport Corporation suspending its service for the second day, thousands of people were stuck at different places and trains were running over crowded in the region.

The JAC only exempted the buses carrying passengers to Warangal for Medrama Tribal Jatra.

Osmania Campus continued to echo with the protest slogans as thousands of students took out a procession in the campus and held a meeting near the Arts College building to condemn the use of force by the police.

The Students' JAC also knocked on the doors of the State Human Rights Commission with a complaint that the tear gas shells fired by the police on the students in Campus on Wednesday were expired and caused more injuries to the students.

The SHRC chairman Justice Subhashan Reddy issued a notice to the Hyderabad city police commissioner to appear before him and given an explanation.

Later, new city police commissioner Abdul Khayyum Khan, who took charge on Thursday, appeared before the commission and explained that use of expired tear gas shells does not pose any threat or cause any harm to the people. He promised to get back soon to the commission with a detailed report.