Americans are angry, I am frustrated: Obama 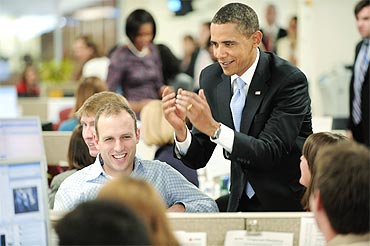 A day after completing a year in the White House, President Barack Obama feels that he has neglected his direct connect with the American people who he says are 'angry and frustrated'.

As he absorbed a stinging blow from the voters, Obama admitted that his getting embroiled in tackling a flurry of crises had weakened his bond with the people. And this is the reason behind the surprise victory of a Republican candidate to a Senate seat held for almost five decades by Edward Kennedy, a Democrat.

"The same thing that swept Scott Brown into office, also swept me into office," an introspective Obama told ABC news.

"People are angry, and they're frustrated. Not just because of what's happened in the last year or two years, but because of what has happened over the last eight years."You have really hardworking folks all across the country, who have seen their wages flat line and their incomes flat lined," Obama said.

"They feel more secure than ever and then suddenly you get the bank crisis in which their hundreds and thousands evaporated, their home values collapsed," the President said.

Obama said he was not surprised by what happened in Massachusetts.

"I'm frustrated, too. I'm frustrated by the fact that over the last decade, we've not seen the kind of progress for middle class families that are needed. That's what I promised to deliver in the campaign," he said.

But the American President said he was now more optimistic about the future of the country than a year before. In the interview, Obama acknowledged that 2009 had been the most packed year of his life.

But he had never been more optimistic about the possibilities before America, the President said, adding that the country has shown a tremendous amount of resilience.

"If we can get through 2009, as tough a year as it was, where a pandemic flu ranked about eighth on my To Do list and ended with an attempted terrorist attack and then a cataclysm in our neighbourhood -- in Haiti. If we can come through 2009 and still not just be standing, but all kinds of good things happening out in the country, then I am very optimistic about where we can go," Obama said.

Noting that the American people's values are sound, Obama said that the country's institutions are not matching up to those values.

"And my job over the course of this year has been to see if we can just solve the immediate crisis. But now I've got to spend a lot more time just focused on how do we get those things to align," he said.

But he said what he misses most is not being able to talk directly to the American people.

Image: US President Barack Obama reacts to sending his first-ever Twitter post during a visit with Red Cross employees to view relief operations for earthquake victims in Haiti, from the Red Cross Disaster Operations Center in Washington | Photograph: Jonathan Ernst/Reuters

Father of boy who raised slogans at PFI march held

Why I am not a fan of Obama

'America, we have come so far'