'India won't have unlimited patience if 26/11 is repeated' 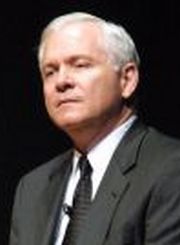 The US made it clear on Wednesday that India's patience would be "limited" if it faces a Mumbai-type attack again, as it warned that Lashkar-e-Tayiba was working in league with the Al Qaeda to destabilise the region and provoke an Indo-Pak military confrontation.

Defence Secretary Robert Gates, who discussed the serious threat posed by terrorism to the region with Prime Minister Manmohan Singh and Defence Minister A K Antony, emphasised the need for "high level of cooperation" from all countries to defeat the "syndicate" of terror, including the LeT, the Taliban and the Tehreek-e-Taliban under the command of the Al Qaeda.

He said the syndicate had "home and safe haven" in the Afghanistan-Pakistan border areas and that there was need to recognise the magnitude of threat to the entire region.

"The success of any one of them is success for all... Victory for one is victory for all. These groups operate under the umbrella of the Al Qeada from North West Frontier Province (of Pakistan) and Waziristan," he said.

"Under the umbrella, they intend to destabilise not only Pakistan, but the entire region by provoking confrontation between India and Pakistan through terror attacks. This is a very complicated issue and very dangerous for the entire region as a whole," he added.

To a question, Gates said that it would "not be unreasonable to assume that India's patience will be limited" if there is a repeat of 26/11.

"After the Mumbai attacks, India had responded with great restraint and statesmanship. But if attacked again, the response is a question. I leave this question to the Indian government," Gates said.

Pressing the need for high level of cooperation to eliminate such forces, he said it would be difficult to wipe them out by targeting only one of the groups.

Describing the terror situation in the region as "complicated" and "very dangerous", the US defence secretary said it would be "very dangerous" to single out any one group out of the syndicate to be targeted as all of them needed to combated together.

In this regard, he said, it was important for all the countries to "remain engaged and eliminate the terror groups".

Asked whether Indian leadership had asked him to press Pakistan to do more on combating terror groups on its soil, Gates said the discussions focussed on syndication of different terror groups and "how they put all of the region, India and Pakistan, at risk".

He said one of subjects of his next visit to Pakistan would be "allay its concerns" so that "they can focus on the real existential threat to Pakistan from groups operating from its territory."

Queried whether he sought India's military role in Afghanistan, Gates suggested that the US was not interested in it given the "real suspicions" between India and Pakistan about the role each is playing there.