News
Business
Movies
Sports
Cricket
Get Ahead
Money Tips
Shopping
Sign in  |  Create a Rediffmail account
Rediff.com  » News » Why sports is so vulnerable to terror attacks

Why sports is so vulnerable to terror attacks 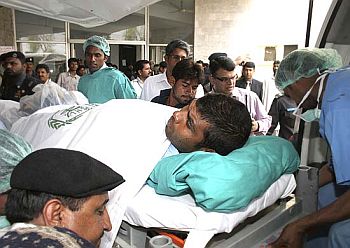 The attack on the Sri Lankan cricket team, the threat to the Commonwealth Games in India and the latest attack on the Togo soccer teamThere appears to be a pattern that terror agencies have been following, and off late, they have begun to realise that targeting sports is the best way to gain a lot of attention.

Security experts tell rediff.com that sports is a soft target and is probably one of the easiest ones too. More importantly, it is a sureshot way of gaining a lot of attention, experts also point out.

Terror groups have also realised that on several ocassions diplomatic ties too are based on sports, and hence this is the best way to shake up relations between two countries in case a sports personality is attacked.

Moreover, targetting a sporting event is easier. There is a frenzy around the venue and on several ocassions there is a let up by security forces in a bid to keep fans happy.

The Intelligence Bureau, however, says that the trend is not entirely new.

The first of terror attacks on sport was witnessed in 1972 when Isreali atheletes were attacked during the Munich Olympics. In the year 2002, there was a bomb blast outside the hotel in Karachi in which the New Zealand cricket team was staying, which killed 12 persons, including the team physiotherapist.

Terrorist outfits such as the Lashkar-e-Tayiba claim that they have different reasons for targetting sport. They say that their primary target is cricket.

While security experts maintain that targetting cricket is the best way to gain attention, since it is more of a religion in both India and Pakistan, the Lashkar on the other hand terms the game as anti-jihad.

The Lashkar feels that people waste five days watching a cricket match, but are not able to spare one day for jihad in Kashmir. The Lashkar has several times called for a ban on cricket, since it feels the game is coming in the way of their war.

Experts such as Gerry O Connel from England feel that there is more that security agencies across the world should do to secure sports. He says that the Commonwealth Games is the next big event that is going to take place and intel warnings suggest that the games are very high on the radar.

For such events a blueprint ought to be chalked out and the security agencies should take absolutely no risk in securing the games.

Other experts also have suggested that each team travelling on sporting assignments should have their own security agencies with them.

At times countries hosting big events have too much on hand and hence there is a possibility of a lapse in security. In such a scenario, it would be good if the teams have their respective agencies, who would coordinate with the agencies of the host nation.

Image: Sri Lankan cricketer Tharanga Paranavitana is carried on a stretcher to a hospital in Lahore after a dozen gunmen attacked their bus near the Gadaffi stadium on March 3, 2009. Photograph: Reuters

9 factors which make a Lashkar terrorist

How India fought terrorism in 2009