Should India and Pak smoke the peace pipe? Tell us. 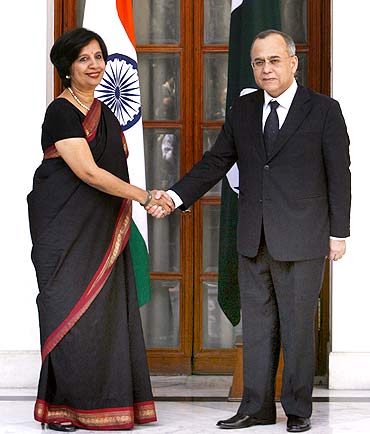 India and Pakistan are smoking the peace pipe amid a cloud of uncertainty over the post-26/11 trial and tribulations. Though the ice has been broken at Thursday's foreign secretaries' meet in New Delhi, the deep chill still remains.

The United Progressive Alliance's decision to hold talks even after the Pune blasts has come as a shocker to many  layman and experts alike. But another school of thought argues that the show  the need to pursue peace  must go on despite periodic setbacks.

Look at the picture alongside. What does the body language indicate? In the full media glare, Pakistan foreign secretary Salman Bashir told India not to lecture Pakistan.

Do we still hold talks with Pakistan? If we do, what should be India's demands? Can Pakistan be given a carte blanche at the high table? Or is it the time to draw up an ever-lasting peace formula?  Dear readers, tell us.