Image: For AIADMK men, Jaya is a goddess 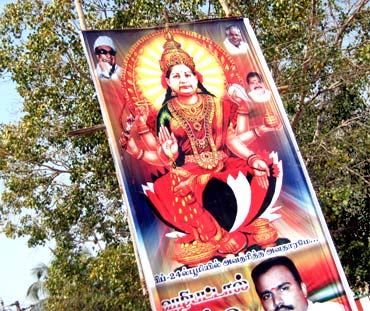 AIADMK chief J Jayalalithaa appealed to party cadres in Tamil Nadu not to celebrate her birthday, which fell on 24 February, at a time when the state was 'moving towards the path of destruction due to DMK's misgovernance".
.
In a statement, Jaya urged her partymen not to celebrate her birthday as the state was reeling under darkness because of the DMK rule.

She also appealed to partymen not to visit her to greet her on the occasion.

"Instead, AIADMK activists should take steps to mitigate the sufferings of the people to some extent, by providing medical assistance, organising blood donation camps and mass feeding of the poor. This will give satisfaction to me on the occasion', she added.

The real celebrations, she said, would be on the day when the party captures power in  Tamil Nadu.

'That day is not far off and the AIADMK rule will blossom in Tamil Nadu', she said.

But the former chief minister's statement did not deter her followers from celebrating the way they wanted. Here is an image from Madurai, where Jaya's followers put up a huge poster depicting her as Mahalakshmi, the Goddess of Wealth. Should we say more?