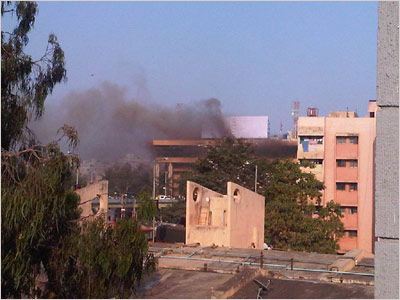 Eleven people are feared to be dead and at least 59 others were injured after a major fire broke out on Tuesday evening at Carlton Towers, a business centre housing several offices and commercial establishments.

Official sources said none of the deaths was due to the fire, but because the victims had jumped from the eight-storeyed building out of panic.

The building's staircase was safe and free for use, they added.

Dr H S Ballal of Manipal Hospital said nine people had died had died in the hospital and of the 59 injured, 19 were critical.

According to Nagendra Swamy, chief operating officer, Manipal Hospital, "We have received around 50-60 patients."

"Some of the persons are seriously ill. We are evaluating the patients' health," he said. Most of them suffered asphyixation, he said.

TV visuals showed one girl clad in a blue salwar kameez landing on the roof of the portico after jumping from the sixth floor and then falling over to the ground. Her condition was not immediately known.

The multi-storey building located on the busy Old Airport Road in Domlur area was completely evacuated and the fire brought under control nearly two hours after it broke out, officials said.

Scores of persons fainted after inhaling the smoke and had to be rushed to nearby hospital for first aid, a senior fire official said.

The fire which broke out in an office on the seventh floor at 4.30 pm has been brought under control and extinguished, Chief Fire Officer N U Erappa told PTI after the fire fighting operations.

The blaze, suspected to have been triggered by a short circuit, created panic with several inside the building shouting for help and many others breaking the window panes.

The fire, that occurred at the start of the peak hour, caused a huge traffic jam around the area.

If you have pictures / videos of the fire you could send it to citizen.reporter@rediffmail.com and we will publish them