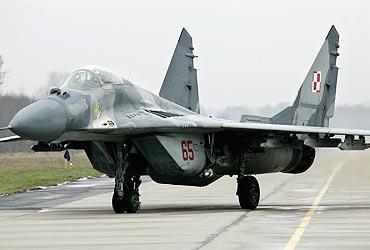 The sophisticated Russian-made MiG-29K maritime fighter aircraft, which will be based on under-construction aircraft carrier Admiral Gorshkov, were formally inducted into the Navy by Defence Minister A K Antony on Friday.Four MiG 29Ks of the 'Black Panthers' squadron were inducted at a ceremony that was also attended by Navy chief Admiral Nirmal Verma.

India had placed orders for 16 MiG-29K in 2004 along with Admiral Gorshkov aircraft carrier from Russia, four of which landed in India on December 4,2009.

"After induction, the fighter jets would be operated for around two years from the under-development shore-based testing facility (SBTF) at INS Hansa till the actual delivery of Gorshkov, rechristened as INS Vikramaditya, slated for 2012," a senior naval officer said. He said pilots will have to undergo training at the Intensive Flying and Testing Unit and a syllabus has been evolved for all future pilots, who would fly the aircraft. For operating the fleet of MiG 29Ks, India had sent 10 pilots for training to Russia and also to the US for deck landing training and on board a French aircraft carrier for operations training, he said.

India has only one aircraft carrier INS Virat but the MiG 29Ks can't be operated from it as they are too big to take off or land at the around 28,000-tonne warship. The officer said more pilots will go to Russia four-and-half months before Gorshkov is inducted into the navy and train for arrested landing and take-off from the aircraft carrier itself. Till then, they will train at the new SBTF and the simulator facility coming up at the air base.

Of the 16 jets ordered from Russia, he said 12 are single-seater fighter planes and the rest four are MiG-29KUB twin-seater trainers and there was a likelihood of signing an agreement with Russia for 29 more MiG fighter planes.

"Of the remaining 12 aircraft, two have arrived in India but they are yet to be readied for induction. The rest will come in different batches in future," he said. Three hangars have been constructed to house the 16 MiG 29Ks at the base.

Comparing the MiG 29K with the MiG 29Bs of the air force, Commanding Officer of the Black Panther's squadron Commander A D Theophilis said the maritime aircraft were more capable than their IAF counterparts as they were packed with more advanced avionics, better multi-radars and capability of operating in all weather conditions.

Image: A Polish MiG-29 taxis at an airport near Warsaw.