Muslims should be generous, help set up Ram temple: Gadkari 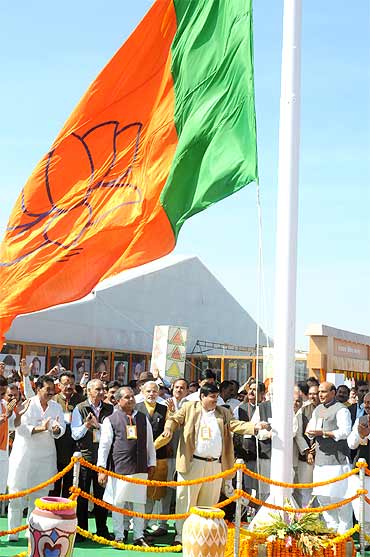 Bharatiya Janata Party president Nitin Gadkari on Thursday appealed to the Muslim community to be generous towards the feelings of Hindus and facilitate the construction of a Ram temple in Ayodhya.

Gadkari, in his first address as party president at the national council of the BJP, said his party would help in the construction of a grand mosque in some other place. He did not specify the location of the land where the proposed mosque will be constructed.

"The BJP stands fully committed towards the construction of the Ram Temple at Ayodhya," Gadkari said even as he stressed on the need to reach out to Muslims, Scheduled Castes and Scheduled Tribes, so that the party could increase its vote share by over 10 percent.

Gadkari said his party had decided to constitute a group of party workers and supporters to prepare an India Vision 2025 document. The group will comprise senior leaders of the party who have served in important positions in the central government, serving and former chief ministers and ministers in state governments.

"The government of the financial wizard Manmohan Singh has failed completely on the economic front. The government has not even got 33 percent marks," he said while referring to huge irregularities in the commodities market that, according to him, had led to an artificial hike in prices.

Gadkari also spoke about the need for instilling more discipline in the party. Speaking at the national executive of the party on Wednesday, Gadkari urged senior leaders of the party to expand their horizons and not to encroach into the space of other leaders.

Former national president Murli Manohar Joshi heaped praises on Gadkari, saying the party president was spot on target when he talked about expanding the leaders' horizons.