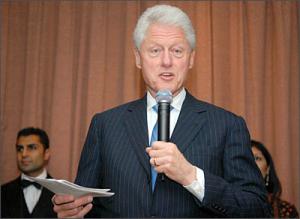 Former United States president Bill Clinton was taken to hospital after complaining of chest pains and has undergone a heart operation, his office said today.

"President Clinton is in good spirits and will continue to focus on the work of his foundation and Haiti's relief and long-term recovery efforts," his adviser Douglas Band said.

US Secretary of State Hillary Clinton left Washington and rushed to New York to be with her husband, who underwent the procedure at New York Presbyterian Hospital.

Their daughter Chelsea was also at the hospital. Clinton, 63, had two stents inserted into one of his coronary arteries and the procedure.

A medical expert told Fox News that 'stents are small, mesh tubes that help support the inner walls of the artery. Some are coated with medications that are continuously released into the artery to help prevent a blockage from forming.'

The procedure is called angioplasty and more than a million Americans undergo it every year. In 2004, Clinton had quadruple bypass surgery at the same hospital and was advised by his doctors to give up salty saturated food.

Clinton's New York office is located in Harlem, which is close to the hospital on the Columbia University campus.

The American press reported that Hillary Clinton has re-scheduled her trip to the Middle East but could further postpone it.

According to CNN, former president George W Bush, who has been working with Clinton on Haiti earthquake relief efforts, spoke with Chelsea Clinton and 'was glad to hear that her father is doing well and that his spirits are high.'

The former president was reportedly exhausted with Haiti relief efforts that he is doing. Last week, United Nations Chief Ban Ki-moon decided that Clinton will lead the international coordination efforts in the earthquake devastated country.

ABC news reported that 'stress' could have caused the attack.

"As we know, Clinton changed his diet and was on cholesterol-lowering medication," a medical expert at John Hopkins University, Jon Resar told the news channel.

"But stress does play a role. But blockages in these bypass grafts can occur despite the fact that someone makes dramatic changes in their lifestyle and does all the right things."

Ban's office said that the head of the UN had sent Clinton a handwritten note wishing him a speedy recovery and thanking him for his tremendous work on behalf of the United Nations for the people of Haiti.