If you halt violence, we will talk: PC to Maoists 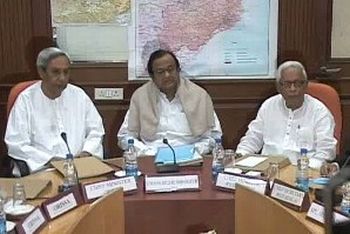 The home minister met the media briefly after a long discussion with the chief ministers of West Bengal and Orissa, Buddhadev Bhattacharee and Naveen Patnaik, respectively.

They, however, had sent their representatives.

Commenting on the progress of operations against the Naxals, Chidambaram said, "Progress cannot be measured like scores in a cricket match. We have achieved considerable success and some key Naxal leaders have been apprehended in the last three months."

As for the outcome of the meeting, the home minister said, "Some decisions have been taken and they will be implemented on my return to Delhi."

Terming the Centre's operation as steady and carefully calibrated, he said, "Our motive is not to kill anyone. Our troops don't fire at anyone unless they are fired upon. Our aim is to restore peace. Once we regain the areas from the Naxals, the chief ministers of the states involved have assured me that they will take necessary steps for development."

"They have promised that measures will be adopted to develop the state of health, sanitation and education of the Naxal-infested areas. We are aware of the fact that use of force alone won't solve any problem," Chidambaram said.

On behalf of the chief ministers of West Bengal, Bihar, Orissa and Jharkhand, Chidambaram sent out an appeal to the Naxals: "If you put a halt to violence, we are prepared to talk to you. It is a simple condition. As long as you continue to unleash violence, these operations will not be withdrawn."

Facing the expected queries on Nitish Kumar and Shibu Soren's absence, the home minister said, "The Bihar CM had informed me earlier that he had a prior engagement and we had agreed to hold discussions on this issue."

"As for Mr Soren, I am told he has been admitted to hospital. He too is willing to lend every possible support in countering the Naxalite problem. We had a long discussion on this about ten days ago and he is very much on board, " informed Chidambaram.

Asked about Left Front's allegation that Union Railway Minister and Trinamool Congress chief Mamata Banerjee was working in tandem with the Naxals, Chidambaram put in a stern reply, "No body is colluding with or can collude with them in parliamentary democracy. For, the Naxals are fighting against the State."

Commenting on Banerjee's remark that anti-Naxal operations in West Midnapore have not yielded effective results, the home minister said, "She has a point of view. I took note of that and assured her that suitable steps would be taken. I also assured her that no innocent people would get affected in the process and that there would be no collateral damage."