More faces of terror are emerging from Hyderabad 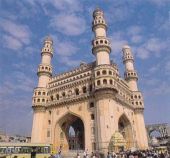 A recent meeting in Andhra Pradesh involving an official of the US Federal Bureau of Investigation and CID officials from across the country, aimed at better cooperation, has brought up some startling facts relating to terrorism in India, especially in Hyderabad.

During the course of the meeting, it was revealed that 21 very dangerous terrorists, who had fled the country and were operating in big positions in Pakistan and Saudi Arabia, hailed from Hyderabad.

Indian Intelligence Bureau officials told rediff.com that Hyderabad had become a big worry in the security set up and as the days passed, the number of such elements was on the rise.

Another interesting revelation was that Hyderabad comes second only to the Kashmir Valley, which has the most number of terrorists in the country.

The number of terrorists in Jammu and Kashmir is easily over 500, but the number of persons occupying key positions in terror groups is around 60, sources point out.

The terrorists that Hyderabad has produced operate more on the planning and organising level. There are no fidayeen fighters (suicide bombers) from the city.

Shahid Bilal was the main face of terror from Hyderabad and held the position of commander in the Harkat-ul-Jihadi before he was killed in an encounter in Pakistan.

Today, the most important face of terror from the city is Abu Jundal, the accent trainer who trained the 26/11 gunmen to speak in Hyderabadi accent. The IB says that operatives from Hyderabad were also chosen to set up the Gulf module with the help of cadres from Kerala.

Intelligence Bureau officials say that the two main groups that operate in Hyderabad are the Lashkar-e-Tayiba and the Harkat-ul-Jihadi. In fact, it was the Lashkar that first showed interest in Hyderabad and focussed its operations in the old city.

There were many arrests and the youth felt that they were being targetted. It was at this time that the Lashkar swooped in and took advantage of the situation.

Prior to making inroads into Hyderabad, the Lashkar held a very important meeting in Murdike (in Pakistan-occupied Kashmir) in which they resolved that they would give anything it takes to ensure that the city is liberated from the Indian government and the rule of the Nizam is restored.

This resolution swayed several youth in Hyderabad, who were already upset with the Indian government. This was the turning point for Hyderabad. The Godhra riots were another strong reason for youths like Riazzuddin Nasir and Amjad Khwaja to take to jihad.