News
Business
Movies
Sports
Cricket
Get Ahead
Money Tips
Shopping
Sign in  |  Create a Rediffmail account
Rediff.com  » News » 'Lashkar not just a threat to India, but US as well'

'Lashkar not just a threat to India, but US as well' 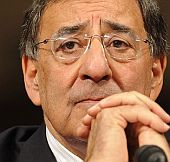 Central Intelligence Agency Director Leon E Panetta, who recently made at least two stealth visits to India, has warned that if the Lashkar-e-Tayiba conducts another attack on India, it would undermine the US-led war in Afghanistan and Pakistan against the Al Qaeda and Taliban.

Panetta, after providing lawmakers an overview about the CIA's efforts in the fight against the Al Qaeda, said: "In addition to the fight against Al Qaeda, we are also facing threats from other terrorist groups -- terrorists like al-Sabah, Hezbollah, Hamas, and other jihadist militant groups."

But he asserted, "Of particular concern is the Lashkar-e-Tayiba, which if they should conduct an attack against India, could very well undermine our efforts in Pakistan."

Thus, Panetta argued: "The bottom line here is that the war on terrorism is not just about Al Qaeda. It is a series of terrorist groups that are basically confronting us and it is the kinds of changes that we see in their methods of approaching the United States that I think represents the very important threat that we have to pay attention to."

"We are being aggressive, we are taking the fight to the enemy, and at the same time we have to be agile, we have to be vigilant and we have got to be creative in the way we approach these new threats," he said.

Panetta was essentially echoing the sentiments expressed by US Defence Secretary Robert Gates, who visited New Delhi last month, and also acknowledged that India's patience would be "limited" if it faces a Mumbai-type attack again.

He warned that the LeT was working in tandem with the Al Qaeda to destabilise the region and provoke an India-Pakistan military confrontation.

Gates said, "The success of any one of them (terrorist groups) is success for all. Victory for one is victory for all. These groups operate under the umbrella of the Al Qaeda from North West Frontier Province (in Pakistan) and Waziristan."

He said, "Under the umbrella, they intend to destabilise not only Pakistan, but the entire region by provoking confrontation between India and Pakistan through terror attacks. This is a very complicated issue and very dangerous for the entire region as a whole."

Meanwhile, Retired Admiral Dennis Blair, Director of US National Intelligence -- under which the CIA, the Defence Intelligence Agency, and several other intelligence agencies operate -- also testifying before the Senate Select Committee on Intelligence, said that the LeT was now no longer a threat to just India and the region, but also a direct threat to the US and its Western European allies.

Blair, in providing the Office of the Director of National Intelligence's Annual Threat Assessment of the Intelligence Community, said, as part of Al Qaeda's global following, "Lashkar-e-Tayiba is a special case."

He said, "Although this group is not focused on the US, we are concerned that, in general, it is becoming more of a direct threat, and is placing Western targets in Europe in its sights."

Blair pointed out that LeT's attack 'against India and its willingness to attack Jewish interests and locations visited by Westerners was demonstrated in the 2008 Mumbai attacks and raise concerns that either the group itself or individual members will more actively embrace an anti-Western agenda'.

Panetta told the Senators, "My greatest concern, and what keeps me awake at night is that Al Qaeda and its terrorist allies and affiliates could very well attack the United States and our homeland."

"Having said that," he added, "the biggest threat I see is not so much that we face another attack similar to 9/11. I think the great threat is that Al Qaeda is adapting their methods in ways that often make it difficult to detect."

And in this regard -- although the Federal Bureau of Investigation arrested and have indicted Pakistan American David Coleman Headley aka Daood Gilani, a native of Chicago and an LeT for conspiring to launch terrorist attacks in India -- Panetta said the likes of Headley and others were also threats against the US.

"What is happening is that they (Al Qaeda and its terrorist allies and affiliates) are pursuing an effort to try and strike at the United States in three ways -- one is that they deploy, they have deployed individuals to this country."

Panetta said, "We had a series of arrests-- the Zazi arrest, the Headley arrest, which are indicative of these that they have deployed here and continue to stay in touch with Al Qaeda."

US must realise LeT threat and eliminate it: Expert