News
Business
Movies
Sports
Cricket
Get Ahead
Money Tips
Shopping
Sign in  |  Create a Rediffmail account
Rediff.com  » News » A canine boost for US in Afghanistan

A canine boost for US in Afghanistan 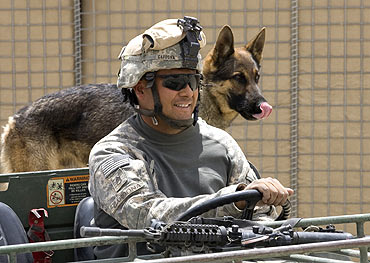 Canines first entered the United States armed services in 1942, during World War II. Today, the dogs are still providing support to the troops on the battlefield.

The dogs may have to live in a war zone and in heat that can soar to 45 degrees centigrade, but otherwise it's pretty much a dog's life for the Labradors, Springer spaniels and German shepherds that make up the canine unit in Afghanistan.

According to media reports, the US has about 2,800 military dogs, the largest canine force in the world.

A single dog can search more area in less time than an entire company could do.

When not on missions, the dogs train daily to sustain their skills. But building a canine team doesn't come cheap. While training can take 4 to 6 months, the programme could cost around $100,000 per dog.

The Taliban are aware of the dogs being used and have tried unsuccessfully to hide the scents of their explosive devices by wrapping them in cotton.

In the words of a soldier, who didn't want to be identified: "The handler is responsible for everything dealing with the dog. You feed him, clean up after him and take care of him. There is a never-ending loyalty with these dogs. They would save my life and I would save theirs."

Image: A US soldier drives a vehicle with his dog at the Forward Operating Base (FOB) Airborne in the mountains of Wardak Province, Afghanistan
Photograph: Shamil Zhumatov/Reuters
Related News: NATO, US Defence Department, Afghanistan, Springer, FOB
Print this article