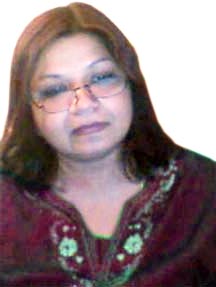 Madhuri Gupta, the 53-year-old second secretary at the Indian High Commission in Islamabad who has been arrested on charges of allegedly spying for Pakistan, was hoping for a plum diplomatic posting in either London or Washington.

"I should get London or Washington," a confident Gupta had told PTI a few months ago. Gupta had earlier served in the Indian mission in Baghdad and admitted that she was looking forward to another good posting sometime later this year.

Gupta made friends easily and could make great small talk. She could talk about clothes, hair styles or Pakistan's Urdu press -- 'where the real news was' -- with equal ease.

Gupta learnt Urdu in New Delhi shortly before she was posted to Pakistan in late 2007. She hired a Muslim woman as a private tutor to teach her.

"She taught me from scratch. I didn't even know my alif-bays," said Gupta, who had earlier learnt another foreign language at Jawaharlal Nehru University's school of languages.

Gupta spoke perfect Urdu and could have easily passed off as a Pakistani because of her accent. Like locals, she was always well dressed, her make-up was in place and her hair was coloured

"I bought this in Lajpat Nagar on my last trip to India," she said when friends recently praised her stylish new coat.

Gupta sometimes came across as brash and fearless, especially when she regaled friends with tales of driving to India via the Islamabad-Lahore motorway, often at breakneck speed.

"I did the Lahore motorway in three-and-a-half hours," she would tell friends, most of whom admired her guts for driving to and fro alone.

Most Indian diplomats travel in groups or with their families on such drives to the Indian border.

The small Indian community of diplomats and staffers of the High Commission in Islamabad would also bank on Gupta for getting them firecrackers or Holi colours during her trips to India.

"I will get natural colours, they won't harm your skin," she announced before a planned Holi celebration to those who didn't want to play with colours.

On a picnic to the picturesque Pir Sohawa viewpoint overlooking Islamabad sometime ago, she decided to be the spokeswoman for a group of Indian women, when a Pakistani woman entered their bus in the parking lot and asked if they had a cassette of 'bhajans'.

While most of the women were wondering how the Pakistani lady had figured out that they were Indians, Gupta dealt with her politely but firmly, ensuring that she got off the vehicle. "You give us your address and we will send you a cassette," Gupta said, taking the woman's address.

When she returned from her last trip to India, she told friends, "I am so tired. There is so much to do when you are in India. There is no time to relax. I feel I am back home now."

Gupta was quick to notice the expression on her friends' faces following her remark. "Home is where you live. Good or bad, this is home," she laughed out loud.

ISI has increased its spending on Indian moles