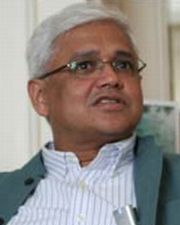 Noted Indian author Amitav Ghosh has won the prestigious Dan David Prize for his remarkable reworking of the great tradition of the Western novel in transnational terms.

The one million dollar award is a joint international enterprise endowed by the Dan David Foundation and headquartered at Tel Aviv University.

It is annually awarded in three different fields -- Archaeology, Performing Arts and Material Science -- in the three-dimension time framework of past, present and future.

Ghosh, 53 is the third Indian to win the award, joining an elite league comprising of chemist CNR Rao and musician Zubin Mehta.

The Indian author will be sharing the prize in the present dimension with Dr Gordon E Moore, whose Moore's Law has become the guiding principle for the semiconductor industry to deliver ever-more-powerful chips while decreasing the cost of electronics.

"Ghosh's work provides a transnational understanding of the self seen as the intersection of the many identities produced by the collision of languages and cultures; displacement and exile -- lives torn between India, Burma, England, and elsewhere; families torn by the violence and psychological turmoil of colonial rule and post-colonial dispossession; a globe wracked by two world wars and their ancillary bloodshed", the jury wrote in their award conferring remarks.

The above-mentioned topics have been integral to his work right from his earliest novels, The Circle of Reason (1986) and The Shadow Lines (1990).

The jury also recognised his contribution in fiction as distinguished equally by its precise, beautifully rendered depictions of characters and settings, and by its sweeping sense of history unfolding over generations against the backdrop of the violent dislocations of peoples and regimes during the nineteenth and twentieth centuries.

"This is most evident in The Glass Palace (2000), which traces the life story of Rajkumar, a self-made young man who builds a fortune in the teak and rubber trades, and spans a century of Indian and Burmese history, from the fall of the Konbaung Dynasty to British rule, through the Japanese invasion during World War II, and beyond", they added.

The prolific writer has also brought out the impact of Western science and technology on non-western worlds, and the consequent entanglement of political and environmental upheaval, also often lies at the center of Ghosh's work.

In his book The Calcutta Chromosome (1995), Ghosh writes of Hindu beliefs about the transmigration of the soul intersect with modern-day ideas about genetics and cloning.

Whereas The Hungry Tide chronicles conflicts of culture, class, and world-view through the interlocking stories of an American-born marine biologist of Indian extraction, the illiterate native who becomes her guide, and a Delhi professional who acts as her interpreter.

Ghosh is also a recipient of other awards like the Prix Médicis Étranger, the Arthur C Clarke Award, Hutch Crossword Book Prize, the Grand Prize for Fiction of the Frankfurt International e-Book Awards, the Sahitya Akademi Award (from India's National Academy of Letters), and the Grinzane Cavour Prize.