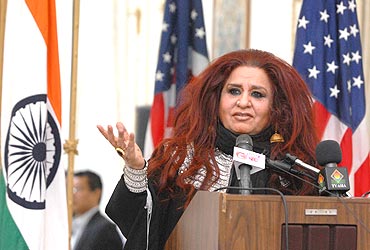 A motley group of Indian entrepreneurs, an economics professor and a leading Indian Muslim leader and industrialist are among more than 250 from nearly 60 countries, who have descended on Washington, DC on the invitation of the White House to attend the two-day Presidential Summit on Entrepreneurship hosted by President Barack Obama beginning today.

The White House said that on his June 4, 2009 speech in Cairo, President Obama had announced that the US government would host a summit on entrepreneurship to identify how the US can deepen ties between business leaders, foundations, and entrepreneurs in the United States and Muslim communities around the world.

The majority of the delegates to the summit, titled, A New Beginning: The Presidential Summit on Entrepreneurship are from Muslim-majority countries and those with sizable Muslim minorities and of the Indian delegation of six, five are Muslims.

They comprise the maven of herbal beauty products in India and now worldwide, Shahnaz Husain, whose Shahnaz Husain Group is a pioneer and leader of Ayurvedic, skin, hair and body care, and touted as the largest organization of its kind worldwide with a global chain of franchise salons, shops, beauty training institutes and spas; Irfan Alam, popularly known as the 'rickshaw man of Bihar,' chairman of Samman Foundation that works for the benefit of Indian rickshaw-pullers; Shafi Mather, founder of an ambulance service company in Mumbai; and Shaheen Mistri, an educator of slum children who founded Akanksha and later Teach For India, a nationwide movement of college graduates and young professionals who commit two years to teach full time in under resourced schools.

Also attending are leading Muslim leader and president of the India Islamic Cultural Centre and head of the Hind Group of Industries Siraj Qureshi and Ramachandra Kavil, professor of family business and wealth management at the Indian School of Business in Hyderabad, who has mentored and produced many a young Muslim entrepreneur.

The delegates were slated to attend a battery of back-to-back panel discussions, seminars and interactive sessions that would feature several senior Obama administration officials, including the highest ranking Indian American in the administration, Rajiv Shah, the Administrator of the US Agency for International Development who will address the challenge of entrepreneurs getting access to capital in order to pursue their own ideas and opportunities, and other senior Indian American officials like Srinagar-born Farah Pandith, US Representative to Muslim Communities, who will lead a pane on unleashing the power of women entrepreneurs; Sonal Shah, Director of the White House Office of Social Innovation and Civic Participation who would lead a panel on social entrepreneurship and Pradeep Ramamurthy, senior director for Global Engagement at the White House, who will address the cultural factors that can encourage and discourage entrepreneurship and how to marry a commitment to entrepreneurship with distant cultures around the world.

The luncheon session will focus on innovation and technology, keynoted by Jerry Yang, the CEO of Yahoo! followed by panel discussions on catalyzing youth entrepreneurship led by Shahid Ansari, dean and provost of Babson College, discussing the role of education and training in fostering entrepreneurship. Education Secretary Arne Duncan will participate in this summit.

This will be followed by the panel led by Rajiv Shah.

Obama will speak to the delegates in the evening and according to the White House, will afford the President an opportunity "to speak to his commitment to building these kinds of positive partnerships around the world, to deepening our engagement around the world with Muslim-majority communities, as well as all of those who are interested in pursuing partnerships with the United States on behalf of issues such as entrepreneurship."

The second day will feature remarks from Larry Summers, Director of the National Economic Council, Karen Mills, Administrator of the Small Business Administration, a luncheon discussion on mentoring and giving back led by S A Ibrahim, the CEO of the Radian Group, and the panels led by Sonal Shah, Ramamurthy, Pandith, and then closing remarks by Secretary of State Hillary Clinton.

White House officials briefing about the summit said there would also be "some specific announcements related to projects that the US government will undertake going forward on entrepreneurship, from a range of departments from USAID to the State Department to some of the other USG entitiesCommerce and others who will be represented at the summit."

While all of the Indian delegates and the majority of others arrived last night, Husain, 64, a Padmashri winner, arrived more than a week ago and held a press briefing at the Indian Consulate in New York where she gave several interviews and also attended a one-week course at Harvard University on "negotiating skills" and claimed and senior Harvard students and professionals had been completely bowled over hearing about how she had built her brand with hardly any major advertising campaign to the empire it was today.

She said that at the conference, she would speak on "unleashing woman power," at the panel to be led by Pandith.

Alam's innovative idea to empower rickshaw pullers and help them enhance their meager earnings was also expected to be of interest to conferees since this alumnus of IIM-Ahmedabad had equipped rickshaws with music, magazines, newspaper, and even first-aid kits and advertisements in the front, sides and rear of the rickshaws, so these poor rickshaw pullers could through these value-add earn a little more money.

Also, these rickshaws would offer juices, mineral water and also offer services such as bill collection and for the first time pre-paid services were also offered. This project, started in Bihar with 300 rickshaws, today had over 300,000 belonging to his Samman Group across the country.

There was also Mather's yellow ambulance service, popularly known as the '1298' service, a number which even featured on the speed dial of most mobile phones, who was expected to hold forth at the conference of his highly profitable venture that had grown from one ambulance to 51 in the past five years in Mumbai.

And, of course, the Manchester University, UK, Bombay University, and Tufts University alumnus Mistri's Akanksha Foundation in Mumbai, which grew from an informal college project educating 10 children in one slum in Mumbai to a recognized NGO educating over 3,500 children and Pune, which two years ago was transformed to Teach For India.

Ben Rhodes, Deputy National Security Adviser for Strategic Communications at the White House asked by rediff.com to respond to the contention by some that this was a huge propaganda exercise by the Obama Administration to reach out to the Muslim world by inviting representatives from majority Muslim countries and countries with sizable Muslim minorities and giving them a an all-expenses paid trip and lodging in the hope that when they go back they would counter the anti-American, jihadi narrative in their countries, asserted that "we put no restriction on religion."

"And there are actually a diversity of religions that will be represented among the participants. The United States government, for instance, doesn't query people about their religious background as we pursue people's participation in events like this," he said.

"The geographic diversity is global, though," he said. "It spans from the Middle East to North Africa to Southeast Asia to Europe to Latin America. So we have a very global representation. So we couldn't even tell you what the precise breakdown is in terms of religious affiliation."

But he reiterated that "what we can say is that we believe that, the majority of participants will come from Muslim-majority communities."

Rhodes said that "I'd just say that this is not simply an exercise in public outreach or public diplomacy. We believe that this is the beginning of forging kind of very tangible partnerships in a critical area -- entrepreneurship. And that, frankly, it's a part of America's leadership around the world to do so."

"I'd just underscore that we see it as a win-win issue for all involvedthe participants, the countries and the communities that they're coming from, and the United States working in partnership with them," he said.

He also said:  "As a step in a process of forging deeper and positive partnerships between the United States and Muslim communities around the world."

Rhodes added, "This is a priority of the President's, which is why he included it in his Cairo speech and why he assured that there would be the follow-up on that commitment with this summit."