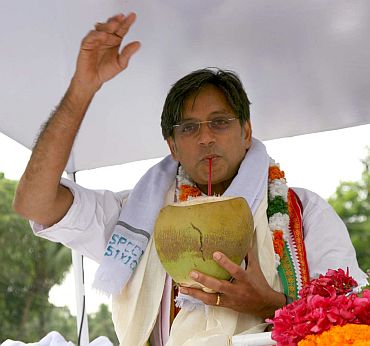 The Congress leadership in Kerala is keeping a low profile in defending Shashi Tharoor, though the main point of his defence in the Indian Premier League issue is that he only wanted to have an IPL team for the state.

The controversy over the Kochi stakeholders has raised much heat in the political scenario of the state, but the topline leadership at the Pradesh Congress Committee (PCC) is observing caution in supporting Tharoor.

In most places the rank and file of the party is taking out rallies in support of Tharoor, but the defence as a political party is limited to only a few words by PCC chief Ramesh Chennithala and Opposition Leader Oommen Chandy.

The PCC has not even released an official statement detailing its stand. The MPs who have supported Tharoor are Peethambara Kurup and K Sudhakaran, others have not uttered a single word. Ministers like A K Antony, Vayalar Ravi, K V Thomas, Mullappally Ramachandran and E Ahamed have also maintained a stoic silence.

The Left Front, meanwhile, has come out vehemently against Tharoor. Finance Minister Thomas Issac said he (Tharoor) should have "shown the same valour and enthusiasm in getting ration quota of rice for the state". He added that the state would not benefit from an IPL franchise.

This is the fourth controversy involving Tharoor in less than a year. The first was over his month-long stay in a five-star hotel in New Delhi and second, the "cattle class" comment on social networking site Twitter. During Prime Minister's visit to Saudi Arabia, he commented on IndoPak bilateral talks, deviating from the age-old foreign policy of the government.

In none of these issues has the PCC leadership supported him, because, as a section of the political class believes, "the Kerala leadership of the Congress is afraid of Tharoor for his political access at the national level". Also, a section of the local media projects him as the chief minister in the making.

In Thiruvananthapuram, from where Tharoor was elected to Parliament, the defence has been limited to a few rallies protesting against IPL commissioner Lalit Modi. The district Congress Committee (DCC) has not spoken, though some of Tharoor's supporters have brought to the notice of the high command the passive approach of the PCC on the issue. It may be noted that Tharoor's candidature for the Thiruvananthapuram seat was opposed by DCC as it had recommended its president V S Shivakumar for the job.

A section of leaders are also not happy with the style of functioning of Tharoor. His attitude and approach will not help the party in augmenting support of the common people, according to them. They believe leaders like Tharoor represent the upper middle class and the rich of the country. "This will not help the party in politically sensitive states like Kerala," said a district-level leader of the party.

There is also criticism against the minister's officer on special duty (OSD) Jacob Joseph. "He (Joseph) has no contact with the people and the workers of the party. The minister is unapproachable even to leaders of the state because of the OSD," said a political functionary.