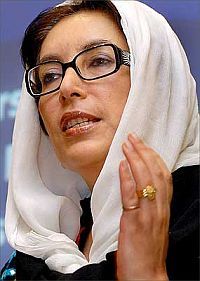 The death of former Pakistani prime minister Benazir Bhutto could have been prevented, according to an UN-appointed independent panel, which slammed the Musharraf government for "failure" to protect her.

"Bhutto's assassination could have been prevented," said the report by a three-member panel headed by Chile's UN ambassador Heraldo Munoz.

The report slammed the then Musharraf government for both the failure to protect Bhutto after she returned to Pakistan and later for the deliberate "failure" to investigate the murder.

The investigators stressed that besides passing on messages of the serious threats to Bhutto, no proactive measures were taken to neutralise the danger by the authorities.

"A range of government officials failed profoundly in their efforts first to protect Ms Bhutto and second to investigate with vigor all those responsible for her murder not only in the execution of the attack but also in its conception, planning and financing," Munoz told journalists.

"The responsibility for Ms Bhutto's security on the day of the assassination rested with the federal government, the government of Punjab and the Rawalpindi district police... none of these entities took the necessary measures to respond to the extraordinary fresh and urgent security risk that they knew she faced," he said.

Bhutto, the first woman to become prime minister of a Muslim country, was killed on December 27, 2007 in a gun and suicide attack after addressing an election rally in Rawalpindi, a garrison city near the capital Islamabad.

The Munoz-led panel, which commenced on July 1, 2009, was to have submitted its report on December 31, 2009 but its term was extended for another three months. It was tasked with establishing the facts and circumstances of the slaying and was not empowered to identify culprits.

However, the report, initially scheduled for March 30, was delayed after Pakistan made a request to the panel urging it to include input from former US secretary of state Condoleezza Rice, Afghan President Hamid Karzai and Saudi Arabia.Munoz earlier yesterday submitted the commission's findings to UN chief Ban Ki-Moon.

Moon had passed on the report to Pakistan's UN envoy Hussain Haroon on Thursday itself, however, in the last minute, Islamabad decided to reveal the contents only after senior Pakistani government officials had studied it. Earlier, senior Paskitani officials in UN had indicated that Haroon would share the report findings at a news conference soon after it was released.

But the UN secretariat decided that the public had all the right to know the report's findings and hurriedly arranged a news conference late on Thursday.

"The federal government failed in its primary responsibility to provide effective protection to Bhutto on her return to Pakistan," the report said.

The commission held that after the suicide attack, Bhutto was left vulnerable in a severely damaged vehicle to hospital while the backup bullet proof Mercedes departed prematurely. There was no autopsy carried out on Bhutto in the Rawalpindi hospital on the orders of the police chief.

"The commission is persuaded that the Rawalpindi police chief did not act independently of higher authorities," said Munoz.

The Commission also questioned why the interior ministry ordered a "controversial" press conference, just one day after the assassination before a formal investigation.

The team concluded that the government never intended to hold genuine investigations and rushed to hush up the matter causing a crisis of confidence in the country.

In the press conference on December 28, the government had claimed that Bhutto had died from a head injury from the force of the blast and the attack had been carried out by Baitullah Mehsud, leader of the Pakistani Taliban linked with Al Qaeda who was killed by American forces in August 2009.

"The commission found that this action preempted, prejudiced and hindered the subsequent investigation," said Munoz. "The Musharraf government did not carry out an investigation as it should have been done not only at the federal level but also at the provincial level."

The investigators noted that the following unanswered questions left the Bhutto death "shrouded in mystery" -- why was a crowd allowed to form around her vehicle forcing it to stop, did the gunshots or explosion kill her, why was no autopsy performed and why was the crime scene hosed down causing irreparable loss of evidence.

Referring to the single investigation of the Punjab authorities leading to the arrest of low-ranking suspect in connection with the murder, Munoz said, "The commission found that in that investigation little to no focus was placed on investigating those further up the hierarchy in the planning, financing and execution of the assassination."

"The investigations even ceased to identify the identity of the suicide bomber, verify the authenticity of Mr. Mehsud's denial of his involvement or to get who may have been behind Mr. Mehsud," he added.

Bhutto's husband Asif Ali Zardari, after becoming the president had asked the UN to carry out an independent investigation.

The commission pointed out that Bhutto faced a threat from several sources, including Al Qaeda, the Pakistan Taliban, other Jihadist groups and "so called establishment in Pakistan" that consisted of elements of military commanders, intelligence agency, allied political parties and business partners.

The report does not reveal who killed Bhutto. The commission stressed that its mandate was only to ascertain the facts surrounding the killing but assigning individual criminal responsibility was the responsibility of the Pakistani government.

The commission has recommended that the Pakistani government establish a truth commission to investigate the death of Bhutto and find who killed her by following all leads and reasonable hypothesis, including Al Qaeda, Taliban and members of the establishment.

The report severely rebuked the Pakistani Intelligence Agency (ISI) for interfering in criminal investigations after the death, which subordinated law and order.

"This pervasive involvement of intelligence agencies in the diverse spheres, which is a open secret has undermined the rule of law and distorted civil-military relations," Munoz said, noting that the ISI played a pervasive and clandestine role in every aspect of Pakistani society.

The commission interviewed 250 people in and out of Pakistan, including Musharraf, top ranking US official and Bhutto's husband and current president Asif Ali Zardari.

Whether the commission had spoken to former secretary of state Condoleezza Rice, Munoz said Rice had refused to speak to the investigative team. "We contacted her and she said that she was not availabe," he said, stressing that he absence did not in anyway hamper the investigation.

The secretary-general set up a special trust fund to pay for the commission's work and asked for voluntary contributions. UN associate spokesman Farhan Haq said on Wednesday that the Pakistani government was the major contributor.

The two ministers left the venue in a Mercedes in a hurry just before Bhutto started from the venue and took along with them a battery of security officers, said Aslam.

"Rehman Malik and Babar Awan forced the driver of the Mercedes to leave immediately. When the (motorbike) pilot saw the car was going at full speed, he drove his bike to lead them. The police security squad and private security also followed them. When the Mitsubishi Pajero in which Benazir Bhutto was sitting came out of the gate there was no police, no private security, nothing was there the security thought she was in the Mercedes," he told the newspaper.

Fauzia Wahab, the Pakistan Peoples Party's information secretary and a close aide of President Asif Zardari, has also told the newspaper that officials of the Inter Services Intelligence had visited Bhutto the night before her assassination to warn her of threat to her life and asked her to cancel the rally at Liaqat Bagh.

When Bhutto did Musharraf in