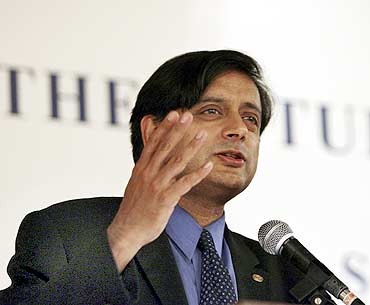 Often surrounded with controversies over his use of words, Minister of State for External Affairs Shashi Tharoor has said he has been "brought down" as there were "elements in our society who rather revel in bringing down people as well".

Tharoor said he wanted to change the Indian political culture, which "sadly" doesn't welcome discussions, but did not have "rank, or the authority or the background" to do so.

"I have been brought down, but I am not going to make any bones about it," Tharoor said admitting that some of the controversies relating to him were due to language used by him.

Asked if there has been a problem understanding the vocabulary of Indian politics, he said, "Possibly. I am not denying that."

On his tweeting which annoys a lot of people, Tharoor, in an interview to a TV channel,  said, "The truth is when any thought you express can reach out to almost seven lakh people, wouldn't any politician kill for an audience like that?"

The minister also justified his tweeting about the government policies, saying "Everybody else is doing it. Even the Prime Minister of Australia tweets. Foreign Secretary of Britain David Miliband tweets and US Secretary of State Hillary Clinton tweets. In fact, when she was in Delhi there were a dozen tweets a day about all her activities and her meetings."

He also observed that Indian political culture was not the one which "welcomed" public discussion of issues requiring debates.

"I only regret the visa tweet because of the nature of our political culture, which is not one sadly, where public discussion of issues requiring discussions is particularly welcomed.

"I would love to change that culture but I can't as an individual start setting the pace. I don't have the rank or the authority or the background to be doing that. I think I should have been, in that sense, a little more restrained about putting it on twitter or indeed even saying it on TV at that point," Tharoor said.