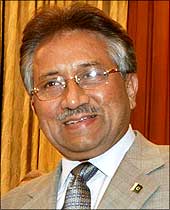 Former Pakistani president Pervez Musharraf was served another notice to appear before a court for his alleged role in the killing of former premier Benazir Bhutto.

Justice Chaudhry Muhammad Ijaz of the Rawalpindi bench of the Lahore High Court issued the notices on Monday asking Musharraf and others to respond by the second week of November. This is the second notice served on the former Pakistani strongman, who is currently living abroad, for court appearances.

Musharraf has also been asked by the Balochistan High Court to depose in the case relating to the murder of Baloch nationalist leader Nawab Akbar Bugti. The petition was filed by Chaudhry Muhammad Aslam, a former protocol officer of Bhutto who was injured when she was assassinated by a suicide bomber in December 2007. Aslam has asked the court to issue a directive for the registration of a FIR against Musharraf, Parliamentary Affairs Minister Babar Awan, former Punjab chief minister Chaudhry Pervaiz Elahi, former Intelligence Bureau chief Ejaz Shah and former caretaker interior minister Hamid Nawaz Khan for alleged involvement in the 'murder' of Bhutto.

The court had issued similar notices to Musharraf and the others last month, asking them to appear before the judge in person or through their lawyers. Interior Minister Rehman Malik and former Interior Secretary Kamal Shah, who were also summoned, were represented at Monday's hearing by their counsel.

Aslam has alleged that several political leaders and police officials were involved in a conspiracy to assassinate Bhutto. He pointed out that Bhutto had herself pointed a finger of suspicion at Musharraf and Pervaiz Elahi for their 'alleged efforts to eliminate her'.

Coverage: The Assasination of Benazir