'Advani wants to distance himself from politics' 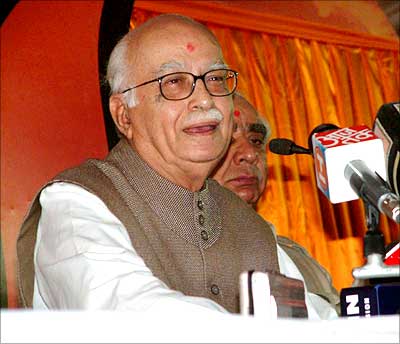 A week after a party leader suggested that his political life was virtually over, a Hindu religious figure has said that Bharatiya Janata Party leader L K Advani has expressed his inclination to "distance himself" from politics.

"He (Advani) expressed a view to distance himself from politics but was not clear when and at what time," Swami Vishveshwara Teerth of Pejawar Mutt told reporters here after Advani called on him.

The swami, who is on a visit here, said Advani did not say he wanted to retire. The swami told him that the guidance of a senior leader like him is needed in the BJP and politics.

"So, for this reason he should not move away from it (politics)," he said. The BJP, however, sought to downplay his statement.

Party spokesperson Rajiv Pratap Rudy told reporters "We keep meeting sadhus and sants to consult them and seek their blessings and guidance. The views of Swamiji should not be seen in political light."

A week ago, BJP leader and former Goa Chief Minister Manohar Parikkar compared Advani to a "rancid pickle" and said had said his political career was more or less over.

Cultural nationalism is not anti-Muslim