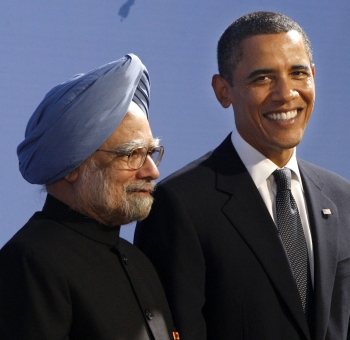 Ahead of the meeting of the foreign ministers of India and Pakistan in New York, Prime Minister Manmohan Singh on Saturday urged Pakistan to shed its mindset of using terror as an instrument of state policy against New Delhi and take action against those involved in the terror attack on Mumbai.

He made it clear that there was no change in India's stand on Pakistan since the Sharm-el-Sheikh talks with his counterpart Yousuf Raza Gilani, a position he has made clear in Parliament.

"India's message is that India seeks to normalise its relationship with Pakistan. But the only obstacle is that it should shed its old attitude of using terror as a state policy," Dr Singh told a press conference while winding up his two-day trip to Pittsburgh where he attended the G-20 Summit.

"We have supplied our material and evidence for them to carry out investigations. Although the tragedy took place in India, the conspiracy took place in Pakistan. Pakistan has admitted to this. We want them to bring to book the culprits involved in the November 26 attacks," he said.

Asked how he looked forward to moving ahead with Pakistan after the Sharm-el-Sheikh episode, Dr Singh said, "If you read my statements in Parliament, I have explained the government's position and I think there is no change on this.

Asked about a report by United States General Stean McChrystal that India was doing good work in Afghanistan but it could lead to instability in the region, he said, "I think, to my knowledge, US and other European powers are appreciative of the role played by India in Afghanistan. We have not supplied any arms, we are also helping them in construction and financing of projects in power health and education sectors. Until today, we have committed $1.5 billion in Afghanistan."

"Not only the people of Afghanistan appreciate (India) but Europe and American leaders are of the same view. As far as Afghanistan is concerned, I agree that we have to sail in these difficult waters," he said.

I am grateful to the people of India, says PM