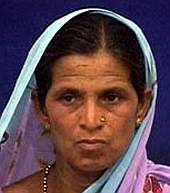 Ending the uncertainty over her contesting polls, Kalavati Bandurkar, whom Congress leader Rahul Gandhi mentioned in Parliament to highlight the plight of debt-ridden farmers in Vidarbha, on Friday filed nomination papers from Wani assembly constituency as an independent.

Kalavati, who was hospitalised late on Thursday night after she complained of chest pain, was accompanied by a physician and Vidarbha Janandolan Samiti President Kishori Tiwari, when she drove in an ambulance to the Assistant Returning officer in Wani to file the papers, Tiwari said.

Earlier, the 48-year-old widow of a farmer in Vidarbha had said she was being pressurised to contest the elections".

"I do not want to contest the elections," she had told a newspaper, alleging that workers of the VJS had made her announce before the TV cameras that she would contest the assembly elections.

Tiwari, whose VJS is sponsoring her election, said, "She is saying such things because she does not want to lose financial aid from Sulabh."

After Rahul Gandhi mentioned her name in Parliament last year, Sulabh International had promised to deposit Rs 30 lakh in Kalavati's bank account. Bindeshwar Pathak, founder of Sulabh International, had asked Kalavati to 'refrain from joining politics' and get involved in social service instead.

Kalavati, backed by Republican Party of India-led Republican Left Democratic Front, is contesting the October 13 polls from Wani in Yavatmal district as an independent.