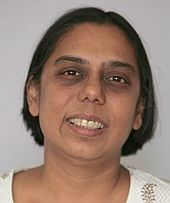 Ruchira Gupta, journalist, activist and policymaker, who for the past 25 years has worked relentlessly for women's and girl's rights -- especially the ending of their sex trafficking -- was among the six individuals honoured by former US President Bill Clinton with the 2009 Clinton Global Citizen Awards.

New Delhi-based Gupta is best known for her work with Apne Aap Women Worldwide, a grassroots organisation she founded in 2002 along with 22 women who were featured in her sex-trafficking documentary, The Selling of Innocents, which won an Emmy Award in 1997.

Apne Aap ('self-help' in Hindi) combats trafficking by building up the capacity of girls and women through small 'self-help' social and economic cooperatives. Through these cooperatives, the organisation has provided access to education, income generation, training and legal protection.

Apne Aap now protects women and girls through 67 such cooperatives and has a goal to reach 200 cooperatives, with 3,000 girls and women participating, in one year's time.

The ceremony took place during the Fifth annual meeting of the Clinton Global Initiative, which convenes leaders from across sectors of society, giving them a forum for develop and then implement workable solutions to some of the world's most pressing challenges.

Clinton in his welcoming remarks, said, "Our honorees see hope where others see despair. The come from different countries and play different roles in society. But all six have fostered positive partnerships and relationships and used them to change the world."

"We owe them for their commitments, which embody the spirit of CGI," he said.

Earlier, in his letter to Gupta, informing her of the award, Clinton had written that he would be "pleased to pay tribute to your leadership in civil society and your extraordinary role in our common mission to address global challenges."

He said, "Your relentless effort to end human trafficking and gender-based violence in outstanding, and I can't think of anyone more deserving of this award."