News
Business
Movies
Sports
Cricket
Get Ahead
Money Tips
Shopping
Sign in  |  Create a Rediffmail account
Rediff.com  » News » Will you vote for these politicians?

Will you vote for these politicians? 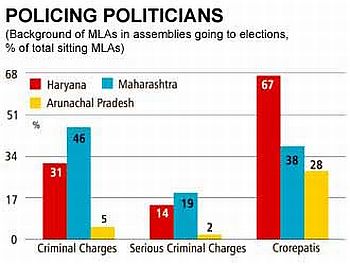 Whatever else the outcome of the forthcoming assembly elections in Maharashtra, Haryana and Arunachal Pradesh, it would be interesting to see if the electorate votes in as many candidates with criminal charges against them as it did the last time around.

Arunachal Pradesh is relatively crime-free when it comes to MLAs, and just 5 per cent have any form of criminal charges against them.