UN worried about lack of freedom for Tamils 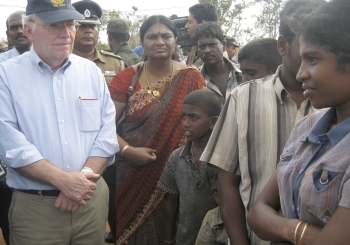 Internally Displaced Persons (IDPs), who live in government-run camps in Sri Lanka, lack the basic right of freedom of movement, according to a top United Nations official who visited the country recently.

Under Secretary General for Political Affairs B Lynn Pascoe told a press conference in Colombo that the UN had not observed the progress expected in rehabilitating the IDPs after the end of the civil war between the Lankan army and the Liberation Tigers of Tamil Eelam.

More than 280,000 IDPs now live in these congested camps in northern Lanka and Pascoe -- who visited some such camps September 17 -- said he was very concerned about the lack of freedom of movement for the inhabitants and the 'closed nature' of the camps.

'People are not free to come or go and they are understandably upset,' he said. 'We picked up great frustration on this point in the camps that we visited. I was told by many -- and quite emphatically -- that they just want to go home.'

'We understand there are security concerns to be addressed. At the same time, this kind of closed regime goes directly against the principles under which we work in assisting IDPs all around the world,' he added.

Pascoe urged the Sri Lankan government to allow those IDPs, who have completed the screening process, to leave the camps. For the remaining IDPs, the UN official suggested that they be allowed to move out of the camps during the day and freely meet with family and friends in other sites.

During the meetings, he discussed the situation of the IDPs as well as issues like human rights accountability and political reconciliation.

Walter Kalin, the UN secretary general's representative on the human rights of IDPs, will visit Lanka next week, Pascoe said. But at the same time, he expressed his concern about the pace of the process of allowing IDPs to return to their former communities.

'If there is more screening to do, it should be speeded up. It appears there are areas where de-mining is not a big concern. For those areas, families who have passed the screening process could be resettled without much further delay. More people should be allowed to stay with relatives and host families,' he said.

The Lankan government assured Pascoe that it intends to provide day passes to allow people to go to work or visit family and friends. The administration also plans to aggressively publicise the option of accommodation with relatives and other host families for the IDPs.

'Of course, this is not the ultimate solution to the problem of getting people home quickly, but it is an interim measure that reduces congestion in the camps,' Pascoe said, calling for the government to show more transparency and to consult more widely to allay the fears and concerns of the IDPs.

He stressed that the IDP issue is particularly important because it provides Sri Lanka with an opportunity to move beyond simply ending the fighting towards solidifying the actual peace process.

On a cautionary note, the UN official added, 'As the situation currently stands in the camps, there is a real risk of breeding resentment that will undermine the prospects for political reconciliation in the future".